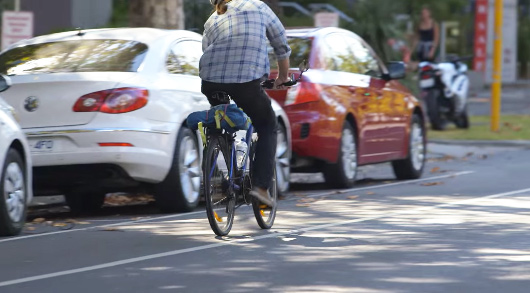 Half of 179 bike riders questioned on Melbourne’s St Kilda Road have dodged near misses there with open car doors over the past two years and almost one in five had been hit by a door, a Port Phillip Council survey has revealed.

The survey, undertaken in April this year, was part of a Council safety campaign aimed at reducing the number of injured bike riders on the busy St Kilda Road bike corridor, which has Victoria’s highest rate of reported car doorings.

Mayor Amanda Stevens said the concerning results also showed more than a third of these riders had experienced a near miss in the fortnight leading up to the survey, with two per cent being hit by unexpectedly open doors over that timeframe.

Cr Stevens encouraged all road users to watch a video launched by Council today in which police and experienced riders who participated in the survey offer safety advice to cyclists and drivers. Tips include riders staying out of the “dooring” zone to reduce their chances of being hit.

“These riders know first hand the importance of everyone sharing the road safely. Council encourages bike riding as a sustainable and healthy travel choice which helps reduce traffic congestion so we want more people to feel safe and confident about jumping on a bike, whether it’s to get to work or for a quick trip to the shops.”

Leading Senior Constable Mark James, who appears in the video, said the educational message applied to all road users. “Everybody, whether they are a cyclist, driver or pedestrian, has a role to play in ensuring our roads are safe,” he said.

St Kilda Road runs through the Cities of Port Phillip and Melbourne, making it one of the busiest commuter routes for bike riders in Melbourne. In the five years to June 30, 2014, there were 113 known casualty crashes involving bike riders, with 25 receiving serious injuries. More than a third of these crashes came from doorings.

It is believed many incidents, including near misses, go unreported.