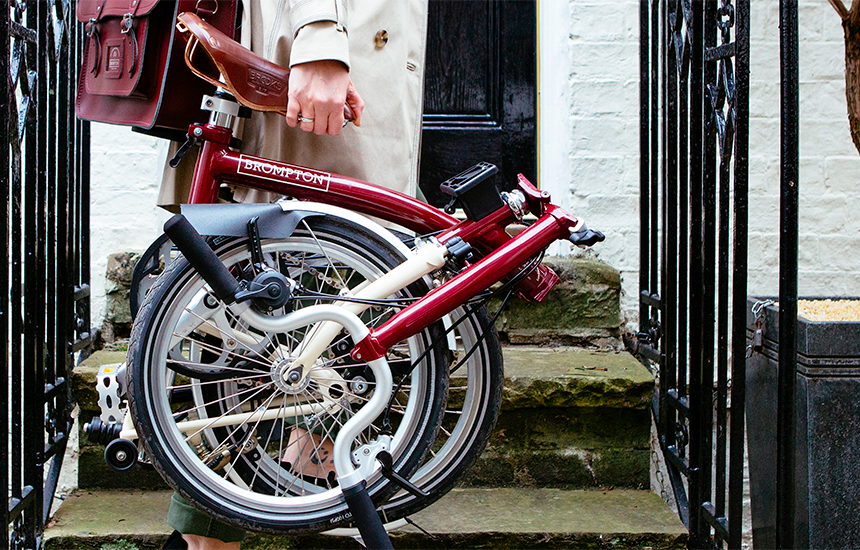 Nobody knows for sure who made the first folding bicycle. Several patents were issued in United States, France and Britain in late 1800s, but very few machines survive, and it’s unclear whether some of the designs were ever built. One of the earliest examples is Englishman William Grout’s design from 1878. Not technically a folding bike, Grout’s Penny Farthing had a folding front wheel and a frame that could be pulled apart for storage and transportation.

An early success was known as the Captain Gerard folding bike – although Gerard was more involved in marketing than design. In 1890, the bike was adopted by the French army, followed by the armies of Russia and Romania, and by the 1900s there were several manufacturers, most notably the Birmingham Small Arms company.

Folding frames came into their own in World War One. They were used in the thousands by messengers and infantry who could carry them on their backs over rough terrain. They were later widely used by paratroopers in World War Two.

New Yorker Charles Clark filed a patent for the first small-wheeled folder in 1922. His design wasn’t a commercial success, but its influence is easily seen in modern bikes like the Dahon and Brompton.

Folding was golden in the 60s and 70s when dozens of makers competed with similar designs. Released in the early 60s, the original Moulton was not a folder, but its compact simplicity was influential. The Puch Pic-Nic and Raleigh Twenty spawned many imitators, as did the small aluminium Bickerton, which would fold down into a tote bag.

Always a niche product, folding bikes have boomed in recent times as part of a growing emphasis on multi-modal transport in cities, particularly in Europe and Asia. With more than 150 brands to choose from, there’s sure to be room for a folding bike in your life.

The London made Brompton is widely regarded as the leader of the folding pack. The Brompton’s pivoting rear triangle doubles as suspension, and the bike folds down with the chain on the inside to keep things clean. Small wheels on the seat stays allow the folded bike to be wheeled around, and riders can choose from a huge range of gearing, luggage handlebar and frame options. An electric version is being released this year.
brompton.com

TERN
Founded in 2011, Tern specialises in folding bikes, and has quickly become one of the most popular brands. Known for lightweight and quick unfolding action, Terns are available in urban, performance and touring versions with choice of accessories and specifications to suit all kinds of riders and budgets.
ternbicycles.com/au

BIRDY
Birdy bikes were the first to feature front and rear suspension. The unusual leading link front setup eliminates dive under braking, and the aluminium monocoque frame is stiff and strong. The frame itself has no hinge, folding duties are performed by the rear swingarm.
stkildacycles.com.au

STRIDA
The minimalist Strida has an unmistakable single-triangle frame, which collapses in five seconds into a ‘wheeled walking stick’ when not in use. Its single-speed kevlar belt drive needs no maintenance or lubrication, and its unorthodox geometry makes it highly manoeuvrable – if not a little tricky to get used to.
strida.com.au

MONTAGUE
Montague stand out from the folding bike pack thanks to their 26-inch wheels. While perhaps a bit big in its folded state to carry onto the bus, its robust, full-sized frame has other advantages. The US military deployed the Montague Paratrooper in Iraq and Afghanistan, and the company builds urban and mountain bike versions for civilian use.
montaguebikes.com.au

GIANT
The Giant Expressway is reminiscent of 70s folders like the Puch Pic-Nic and Raleigh Twenty, with its simple hinged main tube design. Unlike its predecessors though, it’s made of aluminium, so it’s a fair bit lighter. A rigid rear triangle gives it stable road manners and the price makes it an appealing option for commuting.
giant-bicycles.com.au

FIAT 500 POP
The Fiat 500 is one of the motoring world’s most loved designs, and now the Italian car maker has applied its perky and petite styling to a folding bicycle to create the ultimate auto accessory. The Fiat 500 Pop is a single speed with a coaster brake, so there aren’t any cables to twist and tangle when it folds. Finished in the same shade of white used on the four-wheeled version, the Pop packs down small enough to fit in the car’s tiny boot.
zanco.com.au