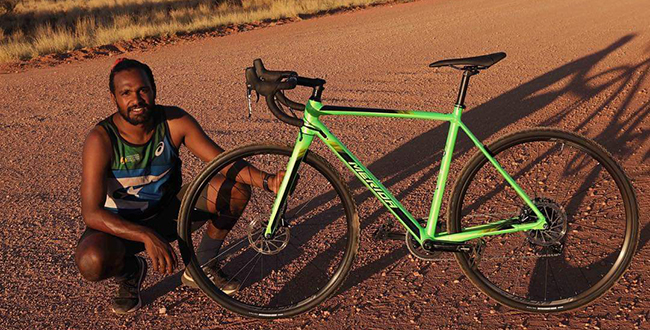 Zibeon Fielding’s mission is to provide better outcomes for his community of Mimili, a remote Indigenous community situated in the far north-west region of South Australia on the Anangu Pitjantjatjara Yankunytjatjara (APY) Lands.

At the age of 25, Zibeon has already achieved a tremendous amount. He’s a father, runner, health worker and proud Indigenous man. In 2016, he was selected to participate in the Indigenous Marathon Project, completing the New York City Marathon under world champion Robert de Castella. In 2018, he ran the Boston Marathon with the support of the Epic Good Foundation, and organised an ultramarathon of 62 kilometres to raise $50 000 for Purple House in Alice Springs to fund dialysis services for the APY Lands. Alongside this endeavour, Zibeon also directed a short documentary called Running 62 to raise awareness of the power of running.

His newest challenge for 2019, in addition to running the Tokyo Marathon in early March, is to raise $30 000 to build a community gym in Mimili. He’ll do this by embarking on what he calls an “epic” challenge. In just seven days, from 15 to 21 April, Zibeon will cycle approximately 700 kilometres across unforgiving Australian terrain.

In doing so, he will be the first man to ride around the entire APY Lands, from the Stuart highway in South Australia, along the outskirts of the Northern Territory, and cruising past the Western Australia border, back to his hometown of Mimili.

Though no small feat, Zibeon embraces the challenge with passion. “I want to promote a healthy lifestyle and positive change in the community through a culture of running and exercise,” he says.

“The idea of the community gym is one the students of Mimili School came up with. It will give the young people a place to gather, an activity to pursue and employment opportunities as personal trainers and staff.”

Along the way, Zibeon will visit local schools and communities to talk to the children about health, nutrition and exercise and how to become strong, independent leaders for their family, community and culture.

How you can help: