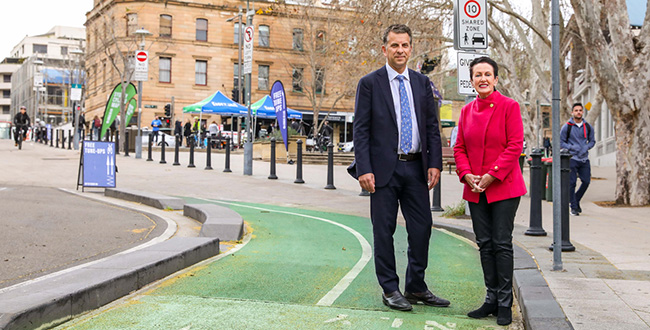 The NSW Government is funding the construction of four new City of Sydney cycleways, to improve safety and cycling ease for the growing number of people riding to the city centre.

Construction on the proposed new separated cycleways, bike crossing and shared path connections is set to begin this financial year.

“Over a million people live within a 30-minute ride to the city centre. These new routes will keep people on bikes safely separated from traffic, and encourage more people to commute by bike,” the Lord Mayor said.

“Every person who cycles in to work takes a car off the road or leaves a seat free on our buses and trains. The most exciting thing about this program is that we’re connecting existing cycleways, creating continuous, safe and separated routes to help people of all ages and riding abilities get in and out of the city centre.”

The NSW Government has awarded the City of Sydney around $7.5 million for the projects as part of its active transport program.

New cycleways will be built on:

Minister for Transport and Roads Andrew Constance said the NSW Government is committed to encouraging healthy and active options to commuters.

“We are investing over $600 million into walking and cycling infrastructure. That’s the largest commitment in this state’s history.”

“We’re working in partnership with the NSW Government and other Sydney councils to build a connected bike network, which will provide a sustainable, convenient and healthy transport option for residents and visitors.

“Daily bike trips across the City of Sydney area have increased 145 per cent from March 2010 to March 2019. At more than 20 sites, bike trips have tripled since independent counts began – with growth highest on our safe, separated bike links.”

New figures released today from the 2019 National Cycling Participation Survey shows 17 per cent (around 41 000) of City of Sydney residents ride a bike each week.

Around 80 per cent of those surveyed have been riding continuously for a year or more, and more than half use a bike for transport – primarily for commuting to work, school or further education.

New cycleways along Miller and Saunders streets in Pyrmont will complete a traffic-free route between the Anzac Bridge and the city. There are already almost 1500 peak hour weekday bike trips on this key cycling route – the equivalent of 30 full buses, or up to 1200 cars.

The proposed cycleways will connect people riding from Leichardt, Balmain and beyond to the Anzac Bridge and Union Square cycleway.

Improvements are also proposed for people walking with three new paved intersections to calm traffic, and a new pedestrian crossing on Miller Street, near Miller Lane.

The city is proposing Saunders Street becomes one-way for traffic heading west, which will provide space for the new cycleway and seven additional parking spaces. Some parking and loading spaces will be removed from Miller Street to make way for the improvements, but three additional part-time loading spaces are proposed on Harris Street to ensure businesses still have loading access nearby.

All trees and greenery along the route will be retained.

People who ride, walk, live and work in the area are encouraged to provide their feedback on the plans by 30 September before they are finalised. Construction is expected to start in 2020.

You can view the plans at cityofsydney.nsw.gov.au/council/your-say/saunders-miller-streets-pyrmont-walking-cycling-improvements