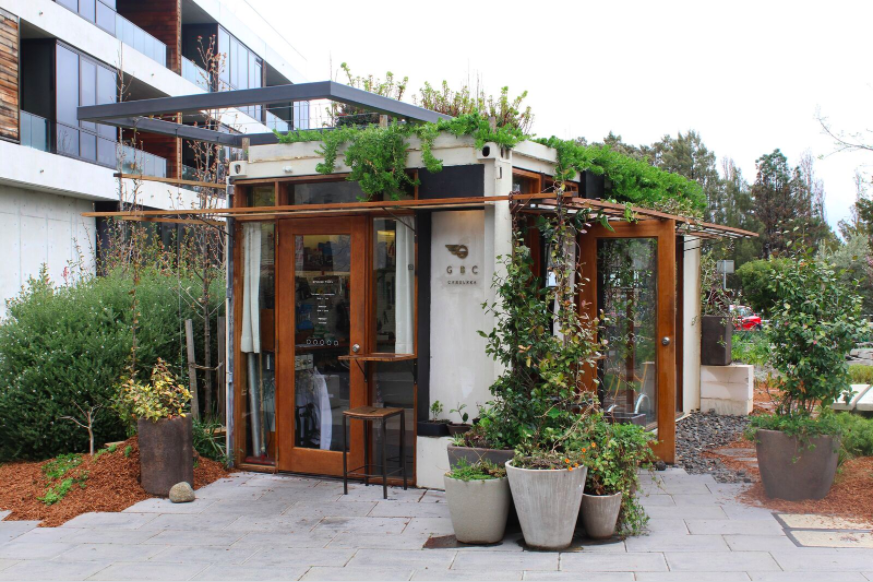 Two sets of brothers, a shared passion for cycling and a good sense of design come together to create local haunt Goodspeed Bicycles.

Myles Chandler’s hands are always dirty. Possibly perpetually stained from chain grease and coffee grime, the Canberra entrepreneur is hardly ever doing business behind a computer. He can usually be found working 10- to 12-hour days in the tiny Goodspeed Bicycle Shop. It’s a space Chandler and partner David Alcorn carved out of a small shipping container located down in the NewActon precinct between the award-winning Hotel Hotel and the Močan & Green Grout café.

Alcorn and Chandler also co-founded that hugely popular café, which is where, up until the start of last year, you could find Chandler handling the coffee machine all hours of the day.

This modern day Renaissance man got his start studying industrial design at the University of Canberra, before jetting off to do joinery in Perth, and then design superyachts in the UK. Upon returning to the ACT, Chandler started running Alley Cat bike races with his friend David Alcorn, who is a fellow cyclist and aesthete – Alcorn is a graphic designer by trade, and Chandler’s brother-in-law.

The duo ran their events under the name Močan, pronounced ‘Mo-chan’, which is a Slovenian word that means ‘to be strong’ or describes something that is resilient or tough. It was a word bandied about a lot in Slovenia (where much of Chandler’s family is from), and Italy, where Chandler and his friends would obsess about old cars and such. The pair’s commitment to projects that look great, run smoothly, and are a bit tough, has been consistent ever since.

In 2007, the brothers-in-law started rebuilding old bikes under the name Močan Brothers. A few years later they had a fortuitous meeting with two other brothers, Nectar and Johnathan Efkarpidis from Molonglo Group – who would go on to launch Hotel Hotel – and by 2012 Goodspeed Bicycles manufacturing launched, with the owners now being four Močan Brothers: David, Myles, Nectar and Johnathan.

Since it first opened, Hotel Hotel has had Goodspeed Bicycles available for guests to use (in the notoriously bike friendly ‘City of Circles’). For many guests, this is where they first fell in love with the smooth operating and stylish frames, and Myles still services the hotel’s bikes.

With Goodspeed, Chandler wanted to bring to Australia something he’d seen whilst living in Italy; a culture where towns have their own bike manufacturer, with locals riding that town’s bikes from the time they first start peddling. From day one the ‘brothers’ have been partnered with local legend Luke Laffan, a Queanbeyan-based frame builder whose work is renowned amongst Canberra’s devoted cycling community.

From the get go, Chandler says they’ve wanted to make frames that are simple and elegant – that are instantly recognisable and easily customisable with vintage parts. Their frames are meant to get better with use, and by personalising the piece with a beloved set of handlebars, or a super comfortable seat, Goodspeed hope people can craft their own personal take on this simple, timeless frame.

Opening its doors for the first time in January last year, the Goodspeed Bicycle shop is situated in an old shipping container. The 20-foot steel frame has been placed down on a grassy patch in NewActon, adjacent to a community garden and art gallery.

Stepping inside, it is readily apparent that Myles has an eye for detail and can’t keep his hands off a great piece of design. Bespoke folding glass windows deftly exhibit Chandler’s expertise in joinery alongside industrial lamps, handmade wooden tables and countertops, and a white corkboard covered wall – plus several small bonsai trees, a skillful craft that Myles learnt from his dad.

Though he has a few extra hands helping out, most days you can find Myles in or around the shop. He knows the locals and his loyal clientele by their first names, and endeavours to keep things running smoothly, so anyone can drop their bike off with a busted rim on the way to work – or a film at the nearby Palace Cinemas – and pick it up on the way home after.

The space is also the pick-up spot for Goodspeed purchases, available online and via a few select workshops around Australia. Currently, the Goodspeed models available include their iconic frame, a step through version, and the Cyclone – a cyclocross gravel bike. You can also get your hands on Goodspeed tote bags, t-shirts, and the occasional Merino wool racing sweater. It’s a small space full of handpicked items that definitely hints at Alcorn and Chandler’s shared passions and their willingness to get their hands dirty in any of these.

*This article originally appeared in issue 19 of Treadlie Magazine.