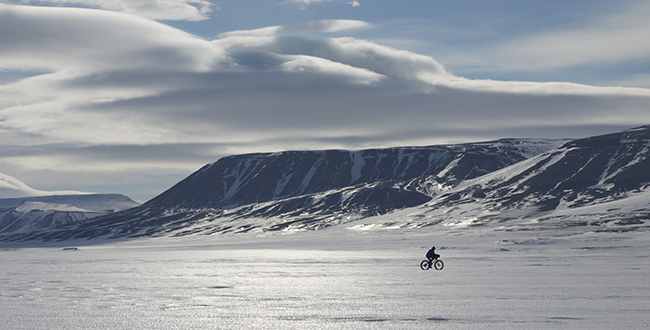 Explorer Kate Leeming hopes her quest to become the first person to cross Antarctica to the South Pole by bike will inspire kids worldwide to plan adventures of their own.

Creating the world’s first all-wheel-drive fat bike and using it to cross the earth’s highest, driest and windiest continent with temperatures ranging from minus 15 degrees to minus 40 degrees looks like being the easy part of Kate Leeming’s most ambitious expedition to date.

The professional Real Tennis player and coach currently has her hands full trying to secure major sponsorship for her 45-day, 1850-kilometre, $640,000 coast-to-coast odyssey. But for a woman who’s already cycled 22,000 kilometres from Senegal to Somalia and chalked up 25,000 kilometres across Australia, both as part of the United Nations Decade of Education for Sustainable Development, formidable challenges are familiar territory.

Training expeditions to Norway and Northeast Greenland, along with upcoming trials in the Arctic Yukon and Indian Himalaya mean most of the funds she has raised to date are accounted for. So in addition to liaising with team members, including renowned Swiss filmmaker Claudio von Planta (Long Way Round and Long Way Down), leading a World Expeditions cycling trip to Morocco, and working with the Victorian Education Department on a leadership education program (featuring a virtual classroom in which students can follow Kate’s expedition in real time), she’s busy meeting with potential sponsors for support that’s essential to her Antarctic trip in November.

She concedes fundraising on this scale is tough. “Not that slogging it out across Antarctica is going to be easy,” she says with a laugh. “But I have quite a lot of confidence that if I get to the starting point I’m going to get to the finishing point.”

Her confidence is well founded. Kate has been an accomplished athlete since her teens and a record-breaking cycling expedition leader for 24 years. She discovered long haul cycling on a post-uni trip to Europe, and began sating her curiosity about the world via life-changing expeditions when the former USSR first opened its borders. While planning a five-month, 13,500-kilometre Trans-Siberian journey from St Petersburg to Vladivostok in 1993 she met adventurer Robert Swan, the first person to walk the North and South Poles. He inspired her to the ride to raise funds for the children of Chernobyl. “He backed [the expedition] and gave us a lot of confidence,” Kate recalls. “And he said, ‘You can make much more out of this – not just travelling for yourselves’.”

Since 2013 Kate has been working with Philadelphia-based mountain bike designer Steve Christini to create the world’s first all-wheel-drive fat bike, which will take her from Leverett Glacier [the Ross Ice Shelf] to the South Pole – and possibly to Hercules Inlet [the Ronne Ice Shelf] on a 1150-kilometre ‘side trip’ should funds allow.

The bike features a ‘shift on the fly’ clutch and rear spiral gear that interlocks with the rear hub. Power is transferred via internal shafts to a forward spiral gear set, which drives a freehub. Instead of stalling on mountains when the rear wheel slips, the front wheel activates to provide added traction and control. Same story in reverse coming down. “It’s such a clever system that you can switch it on and off,” says Kate. “But also it’s very, very efficient.”

Punishing test rides in places like Svalbard, Norway have led the pair to add extra gears, fatter tyres, and a height-adjustable, detachable short ski they’ll try out in Yukon. “It could be too cumbersome … but it’s worth trialling,” Kate says. “It’ll work a little like a paddle steamer. It just might be good for those extra soft conditions because there’s a very fine line as to whether I can cycle or not a lot of the time.”

Beyond reaching the South Pole, Kate’s goal is to support community development initiatives close to her heart and role model exploration for a new generation of adventurers and leaders. “I’m a Scout ambassador, so we’re getting Scouts involved, and I’ve got other connections with UNESCO and around the world,” Kate says. “We’re linking all of this up and what it’s about is inspiring youth to get out there are explore for themselves, and eventually create their own activities and adventures.”