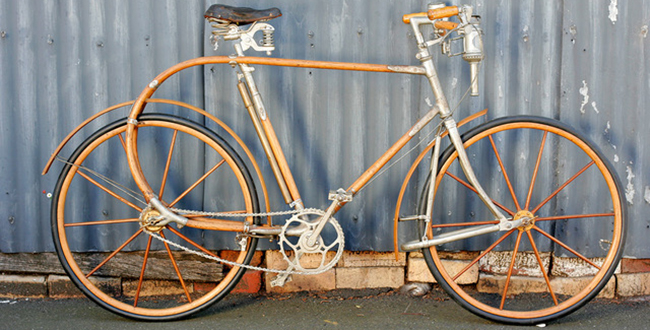 La Souplette, a hickory bicycle made in Paris around 1897, epitomises the style and innovation of “La Belle Epoque”. It is a favourite of our collection and a truly gorgeous wooden bicycle which would not look out of place in a Paris art gallery alongside other beautiful “objets d’art”. La Souplette takes its name from the French word “souple”, or flexible, and was created in Paris during the last years of the 19th century. Reminiscent of the Thonet bentwood furniture designed and made in Vienna at the same time, there are now only a small number of these bicycles in existence. Just spend a few moments examining the elegant lugs and little bolts holding it together.

hen notice the front suspension and the spring mechanism on the saddle; comfort and style combined. The wheels with their wooden mudguards are particularly unusual – the half dozen of these bikes we’ve seen in public and private collections around the world have wire-spoked wheels, not graceful wooden-spoked wheels like these. The tyres are of the American type, heavy single tube, often called ‘singles’ in racing circles. Unfortunately the bike is so precious that we are reluctant to ride it.

We purchased the bicycle at the breakup of the amazing Canberra Tradesmen’s Club Bicycle Collection some years ago. Prior to that it was purchased at auction during the 1980s from a collection in the old Gosford Railway Station, NSW. It’s provenance before that is unknown. It is complimented by an early twentieth-century Germany candle lamp and a French bell (Hirondelle).

This article originally appeared in issue six of Treadlie Magazine.