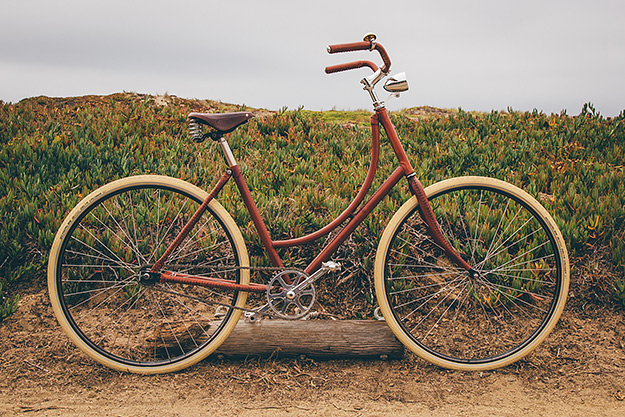 Designer Julien Derreveaux’s Batavus Old Dutch Leather was inspired by six months spent in Amsterdam where he became familiar with the country’s ubiquitous bike. Back in Paris he found a Batavus Old Dutch in pretty poor shape and, with no experience but lots of time on the internet, set about breathing new life into it.

Disassembling the bike revealed that only the frame and front wheel was worth saving. Derreveaux had wanted to work with leather for months and, without a space in Paris in which to repaint the frame came up with the idea of a bike covered in stitched leather, inspired by vintage leather boxing gloves.

Derreveaux visited leather shop Les Cuirs Chadefaux where his project may have caused some amusement among staff but also elicited valuable advice to accompany his purchase. He spent the next couple of months designing paper patterns and hand-stitching thin leather over the entire frame before dying it with a brown tint and wax mixture.

Taking the frame with him on his next move to San Francisco Derreveaux finished the build with the help of the guys from Swell Bicycles using parts from Velo Orange and a Brooks saddle. It may be Derreveaux’s first bike project but it certainly won’t be the last, he’s already moved onto the next one.