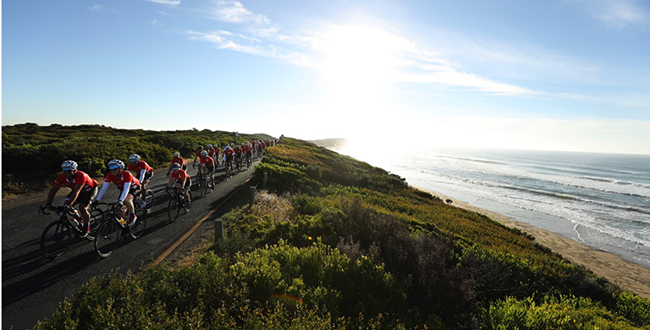 Comprising of the fast and furious Towards Zero Race Melbourne at Melbourne’s world famous Australian Formula 1 Grand Prix track as well as the UCI WorldTour Elite Men’s and Deakin University Elite Women’s Races in Victoria’s stunning Geelong and Surf Coast regions, the event is not to be missed.

The inaugural edition in 2015 featured as Cadel Evans’ final professional race, and the former world champion will again return to join thousands of fans and cyclists in the Swisse People’s Ride on Saturday, 27 January.

Following the same route as the champions, thousands of participants in the 35 kilometre, 65 kilometre or 111 kilometre Swisse People’s Ride will ride alongside Australia’s only Tour de France winner, Cadel Evans and three-time Tour de France champion, Greg LeMond on one of the world’s most scenic courses.

Come to Melbourne, Geelong and the Surf Coast to see the world’s best teams and riders compete for glory, or challenge yourself by taking part in the highly popular Swisse People’s Ride.

For more news and information and to register for the Swisse People’s Ride, visit cadelevansgreatoceanroadrace.com.au