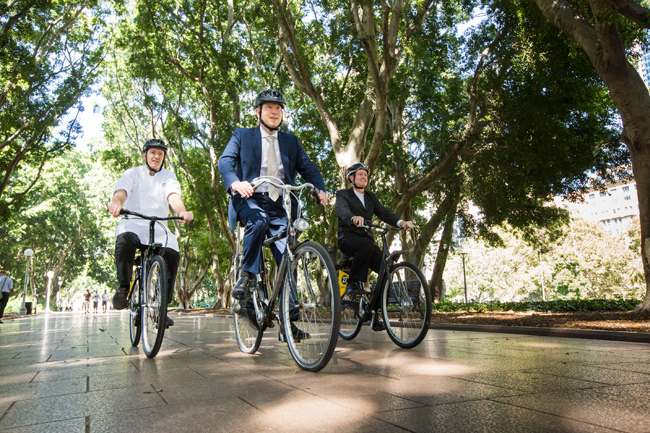 A growing number of Sydney workers who travel to the workplace on two wheels have ensured this year’s Sydney Rides Business Challenge will be the biggest yet.

More than 1,500 employees from 160 Sydney-based businesses have already signed -up to the City-sponsored challenge that will be officially launched with a free breakfast and on-the-spot bike tune-ups in Hyde Park on Tuesday 17 March.

Lord Mayor Clover Moore said the four week event, which gets underway on 23 March, would highlight the benefits bike riding delivers for businesses, their staff and the local economy.

“There’s no doubt that bikes are good for business. Road congestion already costs our economy more than $5 billion each year, and this is expected to climb to $8 billion by 2020. By encouraging more people to ride, we are helping reduce the number of people driving or crowding onto public transport,” the Lord Mayor said.

“Businesses are championing Sydney’s bike riding boom because they know more of their staff are riding to work. The Sydney Rides Business Challenge is a positive way to support active and healthy employees.”

WHERE: Hyde Park north, near the College Street Cycleway

WHO: Lord Mayor Clover Moore will greet commuting riders; free breakfast and coffee will be available; a bike mechanic will be on site for free tune ups; and there’ll be free photos for work teams who come along.

A broad range of businesses have already signed up for the challenge, and many more are expected to come on board over the coming weeks. Companies already committed to the City of Sydney event include: Reserve Bank of Australia, Commonwealth Bank, ANZ, HSBC, Qantas, Optus, PricewaterhouseCoopers, Yahoo7, News Corp, Fairfax Media, Foxtel, Allianz, Apple, JLL, Bluescope Steel, Hewlett-Packard, Stockland and Clayton Utz.

The Hilton Hotel is a former winner of the challenge, last held in Sydney in 2011, and will provide breakfast for the morning riders on 17 March. Hilton General Manager, Ronald van Weezel, said the hotel’s staff was looking forward to defending their crown in 2015.

“We embrace this challenge because riding is so good on three important levels. It is good for the environment, it helps cut down on traffic congestion and it is a healthy activity for our team members. Riding a bike is a lifestyle and we want our staff to embrace that healthy lifestyle,” Mr van Weezel said.

“There’s good reason that businesses in London, Paris and New York have embraced cycling, and Sydney businesses are doing the same.

“Cycling has grown exponentially in recent years as a way for people commuting to work, and many buildings and workplaces are supporting the trend by providing facilities from lockers and showers to bike storage and support staff.”

People who don’t own a bike can take part in three lunchtime ‘try-a-bike’ events between 11am and 2pm at Hyde Park North on 25 March, 1 April and 15 April. Mechanics will also be on hand for free bike checks and tune-ups.