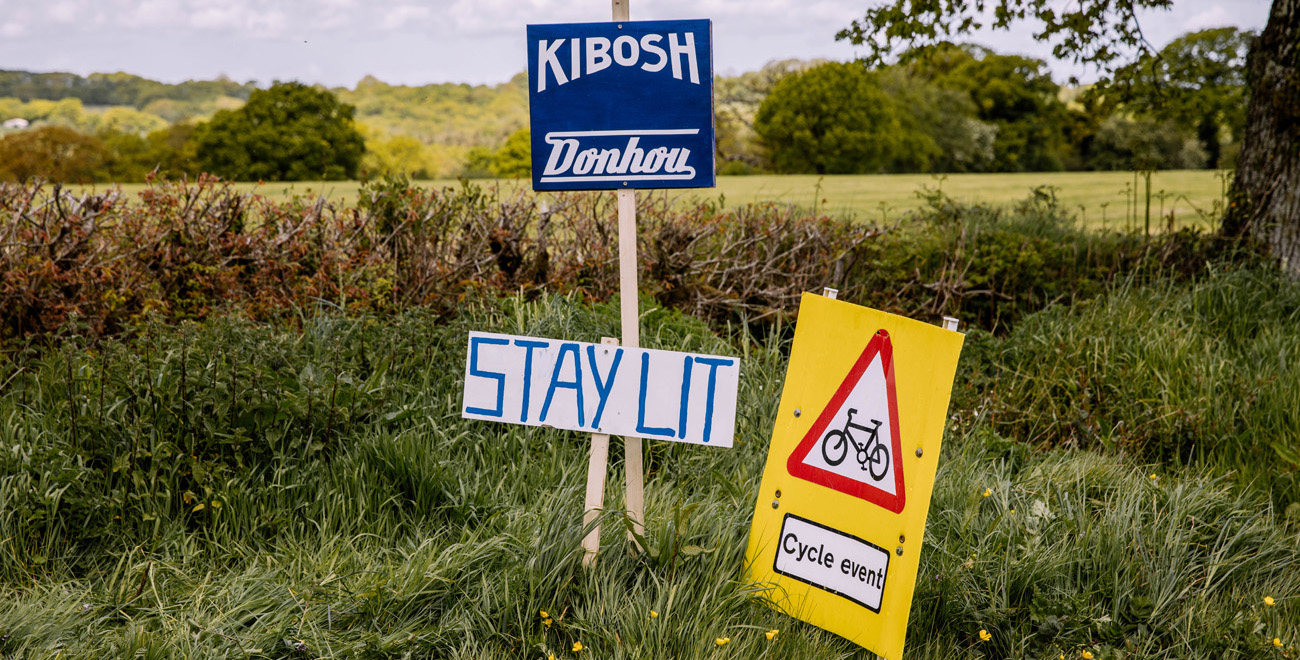 To kibosh something is to quickly bring it to an end, but this England-based cycling team are far from finished putting the heart back in amateur road racing.

For photographer and Kibosh founder Josh Greet, cycling hasn’t been a lifelong passion but an obsession developed after being struck by a car in 2013. After spending a bedridden month reading about everything involving twowheels Greet immersed himself in the Plymouth and South West cycling scene, turning his newfound admiration for his hometown’s rolling landscape to a more serious participation in locally held road races. However this enthusiasm soon soured after attending his first race only to discover “everyone was so fucking serious.”

“I soon realised there were elements of bike racing I loved and some I didn’t … these races reminded me of the sporty kids at school, which I hated,” says Greet.

Sharing this frustration with accomplished riders and future teammates Dexter Hurlock, Neil Phillips and Ross Flashman, the group went in search of a club that matched their obvious talent but also shared their ideal of racing for racing’s sake. Irked by other amateur’s fixation on “turbo trainers, aero gains and saving themselves for a sprint”, the group decided to put their own team together.

“There was not enough racing from the heart – even if that meant you ended up dropping yourself. For us results didn’t matter … just trying as much as possible to make it a race,” explains Greet.

“We were all friends and the passion for just riding was mutual.”

Recently growing in numbers with the addition of cyclo-cross and road racers Jonathan Dennis, Rob Saunders and George Marshall, Kibosh continues to surge into the local racing scene, setting themselves apart with well-designed kits, team merchandise and the recent successful hosting of their own race. But it was their collaboration with London-based custom bike designer and builder Tom Donhou of Donhou Bicycles that helped take Kibosh to the next level. Donhou, a former product designer, left behind his steady career in 2009 to pursue his passion for bicycle design and has since released a number of award-winning, limited-run steel road and cyclo-cross bikes.

“Tom had seen what the team were doing and felt it fitted his style and how he liked to see people race,” explains Greet. “He felt his business had got to a stage where he’d like to see people racing his bikes and giving them a proper test.”

Alongside Donhou, the Kibosh riders directly involved themselves in the design and construction of the team’s bikes, creating a personal connection between the raw materials and the finished product, which Greet says gives the riders a little something extra when pushing to the finish line. With the geometry of each bike ever so slightly tweaked to fit the specifics of each rider, Greet and the Kibosh riders not only hand-picked elements like their tubesets and paint, but also contributed to the build by cutting, filing and drilling many of the bikes’ individual components.

Despite attending races across England, Kibosh have stuck closely to their roots, proudly displaying a “patriotism” for the southwest of England where much of the team currently live or were raised. The counties of Devon, Cornwall and beyond support a dedicated cycling community made up of both casual and fanatical riders with the quiet, steep and exposed countryside providing the ideal cycling setting. This allegiance to their local area is summed up by one of the team’s mottos – “South West Is Best” – which is proudly displayed on Kibosh’s blue and white kits. A quick look at Kibosh’s social media will make apparent the team’s admiration for former Formula One champion James Hunt, who was best known for his ruthless speed and highly publicised playboy antics. Hunt and his famous Marlboro McLaren sponsor is imitated by Kibosh’s own logo, but more significantly his relentless attitude embodies the same doggedness and passion for racing that Kibosh hope to offer in their own performances.

“With Hunt it was all about racing on the limit and having a good time,” says Greet. “This is what racing is to us – yes, we each love to podium or win a race, but we gain more satisfaction knowing that even if we didn’t get the result, you made others work their arses off to get theirs.” Whether it’s going all-in to set up a grandstand finish or burning yourself out and crashing down the ranks, taking risks is what racing is all about for Kibosh. This mindset succinctly expressed through the team’s other favourite motto – ‘You Ain’t Pro, Bro’.

“We want less post-race protein shakes and more beers,” laughs Greet. “‘You Ain’t Pro, Bro’ is a reminder to ourselves and others around us that racing is about having a good time – not banging on about watts. We’re amateurs and we admit it.”