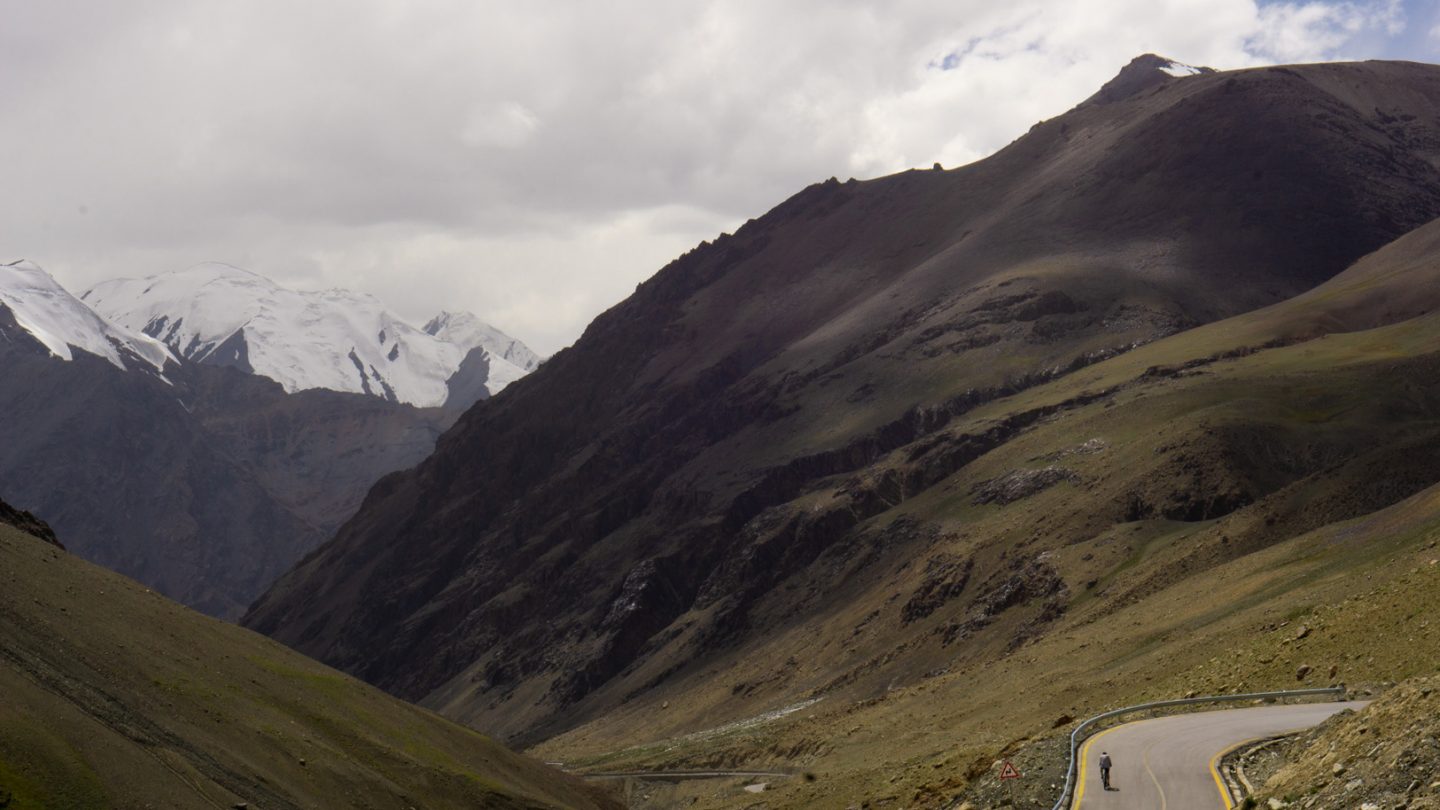 A father-son duo finds that in Pakistan, the journey is sometimes more meaningful than the destination.

Perspective, mood, and the definition of a big day climbing:
it’s incredible how rapidly these change once outside the comfort zone. The morning’s plan to explore just the latter by riding up the Babusar Pass had soon evolved. Straying just off the main road near the town of Chilas, we had set out to ride the towering pass located in Pakistan’s mountainous northern region. An unbroken 3000-metre climb spread over 40 kilometres,
it was set to be a challenge on heavy touring bikes.

The allure of this road had been a talking point for a few days now, but as we tentatively set off towards the first switchback, a police checkpoint had refused us entry without an armed escort.

Begrudgingly, we accepted the offer, flagged down a passing pickup and loaded all our gear. The armed guards had joined the bemused truck driver safely in the cab, while we were getting peppered by small rocks fired by mischievous kids with slingshots.

Working back through the day’s events in my head, I couldn’t help but laugh. I’d managed to convince my non-cyclist dad to take a leave of absence from work to join me for what I had promised would be a truly unique section of my around-the-world bike tour. As a keen rock climber in his youth, the thought of an adventure set amongst some of the biggest mountains on earth had eventually won him over – and although this definitely wasn’t part of the plan, he could hardly complain the day hadn’t delivered both in spades.

For me, this trip was an opportunity to spend quality time with Dad, in turn rekindling our love for the mountains together. It was this love that initially put me on my path to cycling around the world; being brought up on a healthy diet of alpine climbing stories had evidently produced some seriously itchy feet. Feet not content with just exploring the sedate contours of the local green hills of southern England, this ride was a chance to form our own story to tell.

There’s no real way to prepare for the scale of central Asian cycling, hence after breaking through 3800-metre altitude on what I promised would be a gentle first day’s cycle, I wasn’t very popular. Despite starting the ride at over 3000 metres, I had to admit it wasn’t ideal for our first father-son hill climb. This was definitely at the forefront of our minds as we set off cycling up to Pakistan’s highest road.

At 4730 metres, the Khunjerab Pass forms the highest paved international border crossing in the world. Constructed in the late 60s and all through the 70s, the pass is just one jewel in the crown of this incredible road connecting the western-most reaches of China with Pakistan.

Down in the first village of Sost, an azure sky greeted us at first light the following morning. Trucks full of locals waved excitedly whilst music blared out from jaded sound systems in lay-bys. Today was Pakistani Independence Day, and the whole thing felt like some sort of mountain Mardi Gras.

Soon we found ourselves a source of great interest to all parties around. The sheer intensity of the interest took some getting used to, as did the moving selfies from ever-more-precarious positions on passing motorbikes. After this escalated to a full-length interview with a national TV station, we began seeking refuge out of sight of the road to escape the barrage of well-meaning selfie seekers.

With the altitude gain these stops were plentiful, as was the time to discuss our rapidly changing views of the country.

The Pakistan we’d experienced so far had shown unparalleled generosity set against the backdrop of a 7000-metre mountain-scape. Invites for future dinners were being dished out like the endless stream of tongue-scorching dhal-bhat served up from all roadside cafés. These fuel stops ran out as we entered the Khunjerab National Park – signalling a final further 50 kilometres to the summit.

It was now mid-afternoon and our oxygen-deprived legs slowly shuttled our bikes further up this lunar landscape, allowing us to see over the surrounding crags to the glaciated mountain peaks beyond. Side by side, father and son, bikes on big mountains, it was a concise image of our relationship – not one that we would appreciate for a few more hours, mind. A steady graft eventually brought the summit into sight, a Brutalist grey arch signalling the border line. Still a few kilometres off, we could finally allow ourselves a wry smile over a piping hot cuppa from the stove.

A summit embrace surrounded by eager, camera-wielding Pakistani travellers was hardly the moment of clarity and solitude that I usually crave from the mountains. But this wasn’t any mountain, nor any country. In tune with the theme of change that Pakistan had provided so far, this difference was for embracing. Through many conversations up at the border, it turned out that the idea of long-distance bike touring was just as much an alien concept here as it was  when originally explaining it to friends back home. What’s more, with all Westerners perceived to be rich, whilst those who cycle poor, we were amusingly seen as two-wheeled oxymorons.

With our minds slightly enlightened and definitions of a ‘long climb’ irreversibly expanded, we began the long descent. Now just two specks weaving between grey monoliths in the last light of the day, we could properly absorb the beauty of the place in the cold bite of the evening air.

In searching for an adventure on the bike, we found it to lie off the saddle, talking to people, engaging in community life and perhaps even more importantly, each other.