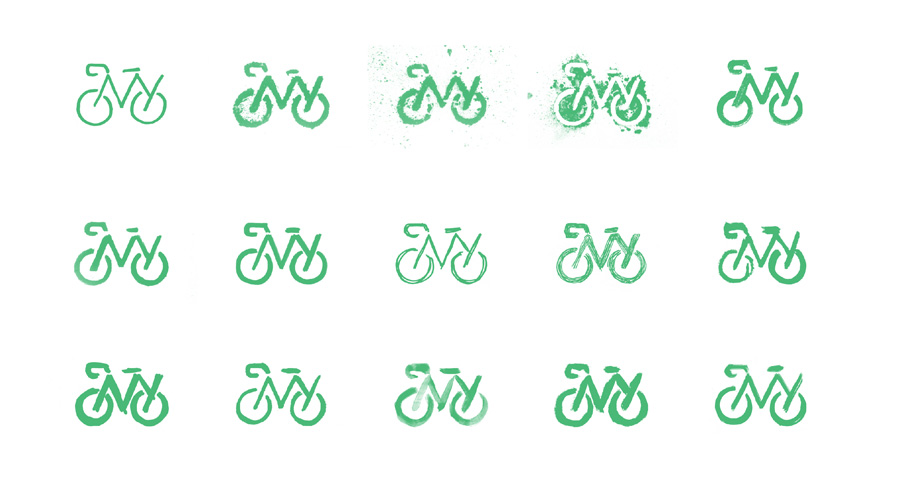 New York New York, so good they named it twice. The city is fast-paced and wise-crackin’; full of yellow taxis and sky scrapers but a cycling city? Bicycling is not immediately what springs to mind when mention of the Big Apple is made.

But think again because amidst all the hustle and bustle, in the shadow of the vertiginous towers, is a movement that started out in 1977 as a one off event and has since grown into one of the largest public cycle rides in the world. The Five Boro Bike Tour is big news in the city and Bike New York, who runs the event, are broadening their horizons again with a rebranding by leading design consultancy, Pentagram.

Pentagram partner Emily Oberman and her team took on the challenge of bringing the non-profit organisation to a wider audience. “The Five Boro Tour event was well known in New York but the Bike New York brand was less recognised outside of its niche,” says Oberman. “We wanted to get the brand to the top of peoples minds as New York became more of a city for cyclists.”

Oberman is appreciative of the history of the Five Boro Tour event, which started out as an American Youth Hostels initiative to get people cycling and saw 250 cyclists including school children ride through the city on June 10th 1977. Since then, the event has grown in size and scope to annually include over 30,000 riders. Since 1999 it has been organised by Bike New York. Oberman and her team immersed themselves in the existing brand before formulating an approach to create a new identity, working with the client to refine it, until they arrived at what she terms, “a new tone of voice”.

With this tone established, the visual identity took form. A logo, lettering styles and colour palette were developed that encapsulate the ideals, philosophy and aspirations of Bike New York.

“Biking is first and foremost in the concept. But also we wanted a timeless and iconic mark that said ‘bike’ and ‘New York’ in one fell swoop,” says Oberman. “It had to be easy to read and instantly recognisable from a distance too.”

The resulting design for Bike New York is a striking visual statement that uses a Sharp Sans font, “because it’s bold with a kick”. Green and grey are the main colours. “Green,” explains Oberman, “because it’s the colour of the New York City bike lanes, as well as trees and grass that you pass as you ride. And grey for the streets of New York. We also use accent colours,” she says: “blue, for the skies above, yellow, for the sun, and hot pink, well, just because.”

The new Bike New York brand was rolled out before the recent Five Boro Bike Tour, with Pentagram’s designs plastered on billboards, advertising hoardings and signage on buildings, signposts and around transport terminals. Digital media streams were developed and a new website unveiled.

On May 1, 2016 roads around the Big Apple were closed along a 40-mile route that would see 32,000 cyclists ride en mass around Manhattan, the Bronx, Queens, Brooklyn and Staten Island. Money raised from the charity event went to fund free bicycle education programs for children and adults.

When Oberman is asked whether the rebranding has had an effect she smiles and says: “You’re damn right it has! The new brand has been used to great effect on the Five Boro Bike Tour as well as the New York Bike Expo. Both of these are iconic events in the life ‘cycle’ of New York City bike culture. Our bold redesign and more personal tone comes though in everything they do. But nowhere is it more apparent than on the website where we were able to fully bring the brand to life in a place visited by longtime Bike New York followers as well anyone interested in learning about bike culture in New York City.”

Pictures and images courtesy of Pentagram