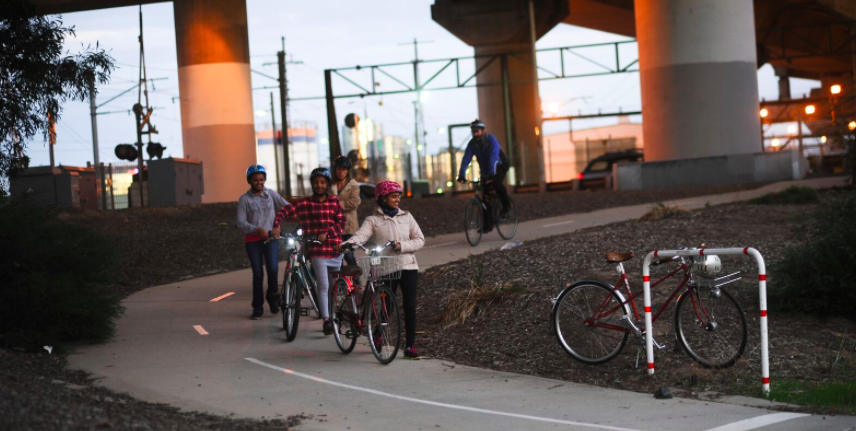 The Squeaky Wheel opens up cycling and its benefits to communities and people that may otherwise never get the chance to ride.

Hamdi Mohamed sits astride a fuchsia Malvern Star. A pink Nutcase helmet tops her white hijab. Her tartan school dress is scrunched up revealing blue trackie-dacks where her legs reach for the pedals. Wide across her face she is sporting the biggest smile you’ve ever seen.

As she skids to a halt, or wobbles dangerously, she doubles over in giggles at her own ineptitude. But there is no ineptitude here. A few lessons ago Hamdi had never ridden a bike. She has since mastered pedalling, steering and braking. And she’s not using training wheels.

“At the start, the people hold you, you know, behind the bike” says Hamdi. “And I went down the other end [of the basketball court] and I was like, ‘who is holding me?’ and they said, ‘it’s only you!’”

Hamdi is one of many successes of the Spokeswomen Program run by not-for-profit The Squeaky Wheel. They wanted to help new migrants to Australia, particularly refugees, enjoy the many positives of cycling and devised a plan to properly equip people with both skills and bicycles.

The women attend four lessons in bicycle-riding before they ‘graduate’ and are presented with the restored secondhand bike they’ve been learning on.

“There are bikes out there who need new owners. Lots are left behind from international students who just leave the country with their bikes locked to a pole. At some point they are collected by the City of Melbourne, they are restored by Good Cycles who we are partnering with, and then we can hand these bicycles over to the people who need them and who can make use of them,” says Jette.

The Squeaky Wheel’s idea took flight when they received funding from the City of Melbourne and partnered with The Huddle at the North Melbourne Football Club. Bridget Barker is sport and recreation co-ordinator at The Huddle. “It is a section of the club where we cater for the local community, a lot of which is multicultural.“

About five years ago when it was set up it was decided that the North Melbourne Football Club could be engaging better with the local community and the best way to do that would be to set up a community hub like this,” she says.

The ‘pillars’ it aimed to address were education, sport and technology. One of the runaway successes of The Huddle has been its Study Support program. Between 4pm and 7pm Monday to Thursday local students are offered free tutoring and a quiet place to study.

It currently has up to 30 participants a night, many of whom go on to graduate with their Victorian Certificate of Education (VCE), where they might otherwise have dropped out of school.

Hamdi is a Huddle Study Support participant and found out about the bike program through it. She immigrated to Australia in 2011, escaping war and famine in her native Somalia.

Living on her own, she is [at the time of writing] in the middle of completing her VCE. She says she’s keen to use her bike to get to and from school faster and to make carrying the groceries home easier.

“The bike program is an example of where we engage with external groups. Being able to get Good Cycles and The Squeaky Wheel in to provide the bikes and provide the education means we can facilitate an opportunity for The Huddle participants,” says Bridget.

The Spokeswomen Program also draws in participants from outside The Huddle, such as Awal Al Wahdy, a 64-year-old mother of four. She hadn’t ridden a bike since she was a girl growing up in Indonesia.

“I saw my daughter and her husband riding and it looked fun. I said, ‘I wish I had a bike, I could ride with you’. And my daughter said, ‘oh yeah, there is a program’.”

Awal remembered the basics – it’s just like riding a bicycle, after all – but was unsure of the road rules regarding cyclists and was nervous in traffic. The Spokeswomen Program taught her hand signalling, head checks, basic maintenance and now she’s breezing along bike paths with the confidence to feel she could join her daughter on weekend social cycles.

Awal is looking forward to some additional benefits too. “I asked my daughter, ‘have I put on weight?’ So it’s good if I ride a bike – maybe I can be healthier!”

This article originally appeared in issue 17 of Treadlie.