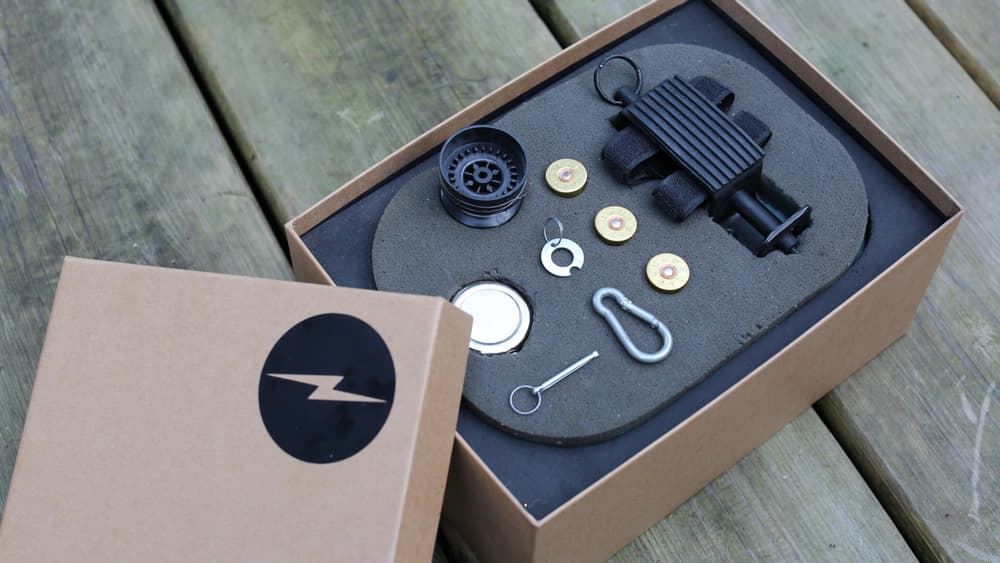 Bike locks and anti-theft gear are a market all on their own these days with plenty of options available and plenty of bicycles still getting stolen. The inventor of Bike Mine, Yannick Read, had two bikes stolen on separate occasions in the dead of night.

“The thieves had a massive advantage because they were able to gain access to the bikes and dismantle the locks in the dead of night while I was asleep”, says Read. “It inspired me to develop an alarm that would wake me up and cause the thief to flee.”

When tripped by a thief, Bike Mine detonates a 150db blast of sound; more than enough to startle a thief and raise the alarm. It’s a simple, low-tech idea that protects your bicycle – or anything else that’s stored on your property.

The device comprises a length of titanium wire, a spring-loaded trap and a small detonator. Velcro straps allow it to be attached quickly to protect almost anything you store outside or in a garage or shed. It’s robust steel construction is covered in a rubber skin to protect your property.

There are no batteries to run down and only one moving part. This means Bike Mine works 24/7 and in all weathers. You can also either attach it to your bike or use it as a perimeter alarm – in other words, it goes off before the thief gets to put his hands on your stuff in the first place.

The basic Bike Mine kit comes with three saluting blanks (shotgun blanks) and the all the hardware needed to set things up. While Read’s kickstarter states that the saluting blanks are totally legal, we’re still not sure about the viability of the product.

Other than your bike not being stolen, the best case scenario is a thief remaining undeterred by the bike mine and still heading off with your favourite mode of transport.

More concerning however, are Read’s disclaimers about using it only on private property and not positioning it in such a way that it will blow up in someone’s face – like a thief who might be kneeling down perhaps?

Though the problem solving aspects of the project are commendable, we don’t like the aggression inherent in the idea. We like our bikes where they belong, but not at the risk of physically hurting someone.