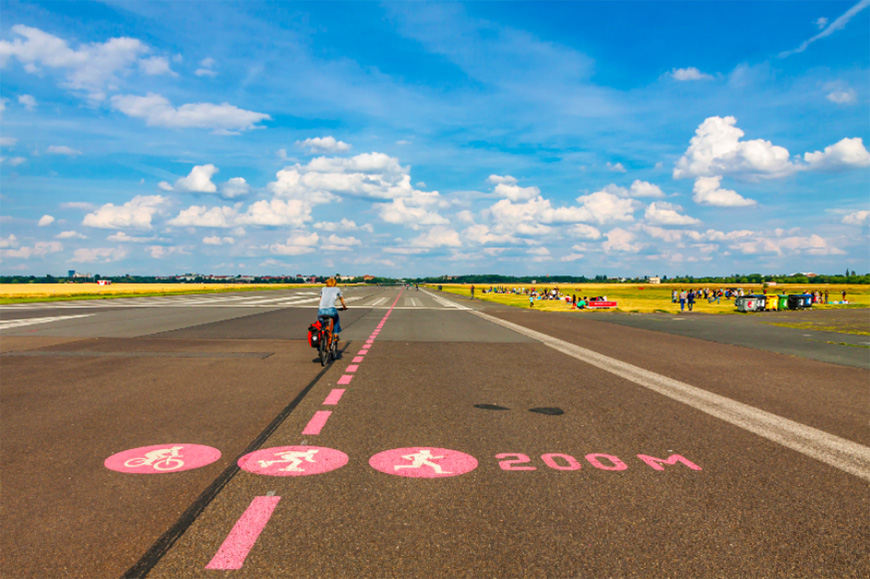 Berlin may not be constructed like your typical bike-friendly city but a combination of laws, new infrastructure and community programs are changing up the landscape.

Berlin is a sprawling city full of cobblestones and tram tracks – features not normally associated with ideal cycling. Yet that is exactly what the city is said to offer.

Bike-friendly laws and infrastructure, wide streets and – more recently – community programs designed to make pedal power available to everyone, are just some of the ways Berlin compensates for its lumpy streets and vast scale.

Germans are well known for their interesting relationship to transport: “On the one hand the German economy is so dependent on the car industry,” explains Katie Griggs, founder of Cycling Lessons for Ladies in Berlin. “On the other, the average person has a strong environmental awareness. And it is not uncommon for a household to have three to seven bikes.”

Because most car drivers are bike riders themselves, the capital’s driving culture is positively geared to notice and respect cyclists. Further, around a third of Berlin’s total area is comprised of forest, garden, parkland, lake and river.

By and large, cyclists can roam freely through the former three; and are allowed to travel by tram or train with a bike in toe. As if these factors weren’t enough to inspire your next cycle tour, Berlin’s well-planned trail network is, arguably, its greatest asset.

Often novel, and sometimes surreal, this web has among its offerings: an abandoned airfield (Tempelhofer Feld)-turned park, whose wide stretches of asphalt surrounded by green make for a lovely, long meander on two wheels; then there is the Treptower Park containing the Spreepark, an abandoned amusement park that operated for three decades from the late 1960s; and, of course, the 160km-long Berliner Mauerweg, which traces the former Berlin Wall.

The Berliner Mauerweg is divided into 14 paths, each ranging from seven to 21 kilometres, many of which have the feel of an outdoor museum complete with information boards, photographs, reflections, and art inspired by the divided Berlin. (Of particular note is the East Side Gallery, an outdoor memorial to freedom, located on 1316 metres of the preserved wall).

Cycling around or through the 3000-hectare, Grunewald Forest is another intriguing option. Simply take the S-Bahn to Heerstrasse, Wannsee or Grunewald station with your bike and enjoy the paved loop circumnavigating the park, or the unpaved trails inside it. A spy station, operated by Americans during the Cold War, is located in the northern part of the forest. 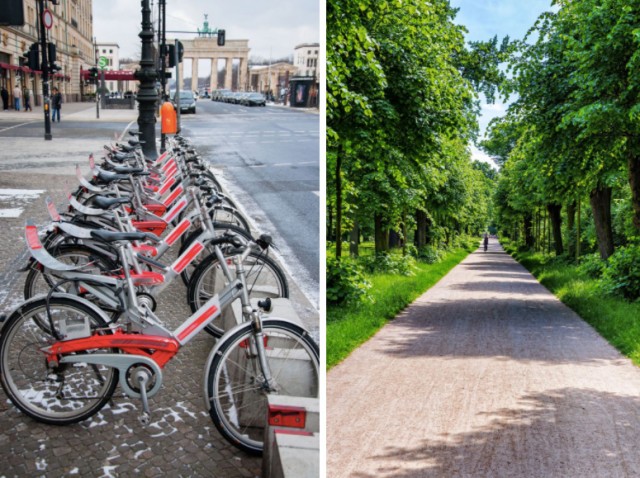 The path through and around Berlin’s Central Park, the Tiergarten Gardens, is another recommended day trip that will have you weaving past – or to – lakes, diversely styled gardens, and two of Berlin’s best beer gardens. Berliners’ interest in good and sustainable living is not only reflected in their fondness for green spaces and alternative transport (although, it should be added that the city celebrates bicycle culture for a week each March in the Berliner Fahrradschau festival).

A number of non-profit programs exist to extend the joys and freedoms of cycling to those who lack either financial resources or riding skills. The bike rental not-for-profit, Bikesurf, was founded by Graham Pope in 2012 in the belief that, “cycling changes how people think about and interact with their environment.”

When Pope moved to Berlin he found bike rentals to be expensive, even when all you need is something simple to get around. So inspired by his own experiences and other sharing initiatives, such as Couchsurfing, Pope developed a system to allow “everyone, not just those who can afford it, to enjoy cycling in a relatively safe city.”

Bikesurf relies on the honesty and respect of its users, who pay – or not – according to their means; it also does not take deposits for borrowed bikes. “Only two people are suspected of stealing bikes out of approximately 3500 users to date,” said Pope. “And Bikesurf is 100 per cent funded by its users.”

Katie Griggs created Cycling Lessons for Ladies in Berlin (CLLB) after a number of refugee women asked how they could learn to ride. Later, she partnered with Club Velo, which trains unemployed people to repair bikes, who sell her bikes at reasonable prices (covered by CLLB crowdfunding).

While the CLLB program exists for any woman wanting to learn to cycle, six Syrian refugees came to its first class and since then women from Iraq, Afghanistan, Brazil, Israel, Somalia and Nigeria – and many more from Syria – have attended classes in the parks around Berlin.

Griggs’ students’ inability to ride a bike has usually been due to insufficient infrastructure in their countries of origin, or because riding was unsafe, or considered uncool there. “Surprisingly, not one woman has ever said ‘I am not allowed to ride a bike,’” said Griggs. “Now they just see it as an easy and free way to get around, and about fitting in to their new home.”