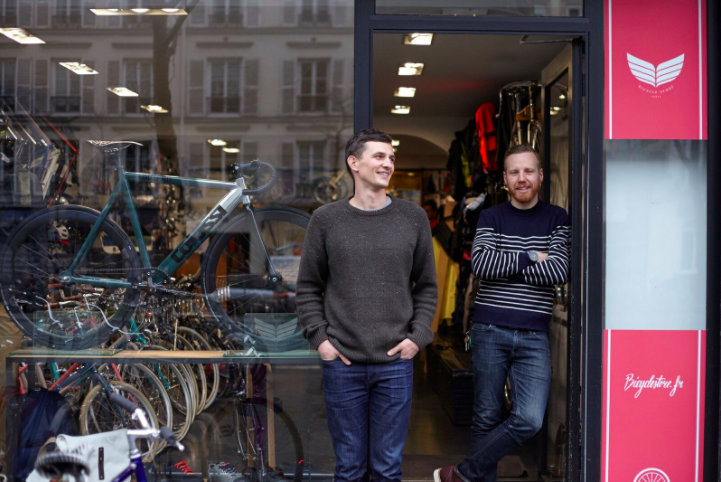 From the first glance Bicycle Store in Paris’ trendy Marais district bears little resemblance to a traditional French bike shop. For one thing, there is no surly mechanic, expired Gauloise hanging from the curled lip, to greet you. Instead, co-owner Alexandre Billard and his colleagues have created a welcoming store that reflects the interests of a newer Parisian urban cycling community.

After years in retail working for large companies Alex was keen to start something for himself. Teaming up with brother Simon and friend Grégory Barbier, the trio brought their combined experience in retail, hospitality and advertising to bear on a shared interest in single-speeds and track bikes. The original concept was for an organic restaurant with resident bike mechanic.

French food laws being what they are that never got off the ground, but the idea of a shop embedded within a community is part of Bicycle Store’s DNA. The launch of public bike-share scheme Velib in Paris in 2007 provided the perfect opportunity, and energy, for what the trio had in mind and Bicycle Store was born a year later.

Targeting urban riders, Bicycle Store more resembles a gallery than a restaurant, with clean white walls to show off stock and fittings designed to keep floor space free for bicycles. Offering middle-to-high-end complete bicycles and accessories, the shop caters to the growing ranks of riders surrounding it, stocking brands from Japan, Italy, Sweden, the UK, France and the US.

Brand sourcing is one of the store’s most important components. Says Alex, “We tried to work with French distributors back in the day but they were laughing at us. Now we have found a bunch of great, useful and super quality bicycle parts and accessories from all around the world.”

In fact, he is thankful for the less-than-accommodating attitude of his French compatriots. “Without them, we would have never met such good people behind Mission Work Shop, Chrome Bag, Tokyo Bike, Brooks and more.”

It’s not only the brands on offer that distinguishes Bicycle Store from the traditional French shop. For Alex, the energy and relationship with the customer are also important. “At the very beginning we had a foosball table to play with our friends during the slow periods of the day. Most important is, of course, l’apéro (drinks) with our friends and customers at the end of the day.”

Not content with providing quality urban bikes, Alex and Simon have gone on to launch their own custom bicycle marque, together with Cyril Saulnier. Heritage Paris combines quality handmade frames, engineered by former French champion Daniel Hanart, with the brothers’ sense of style.

Ironically, in playing their part to resurrect the craft of French frame building, Bicycle Store may have more in common with the traditional French bike shop than they originally thought, although there is still no sign of that surly mechanic at their address on Boulevard du Temple in the 3rd arrondissement of Paris.

This article originally appeared in Treadlie 18