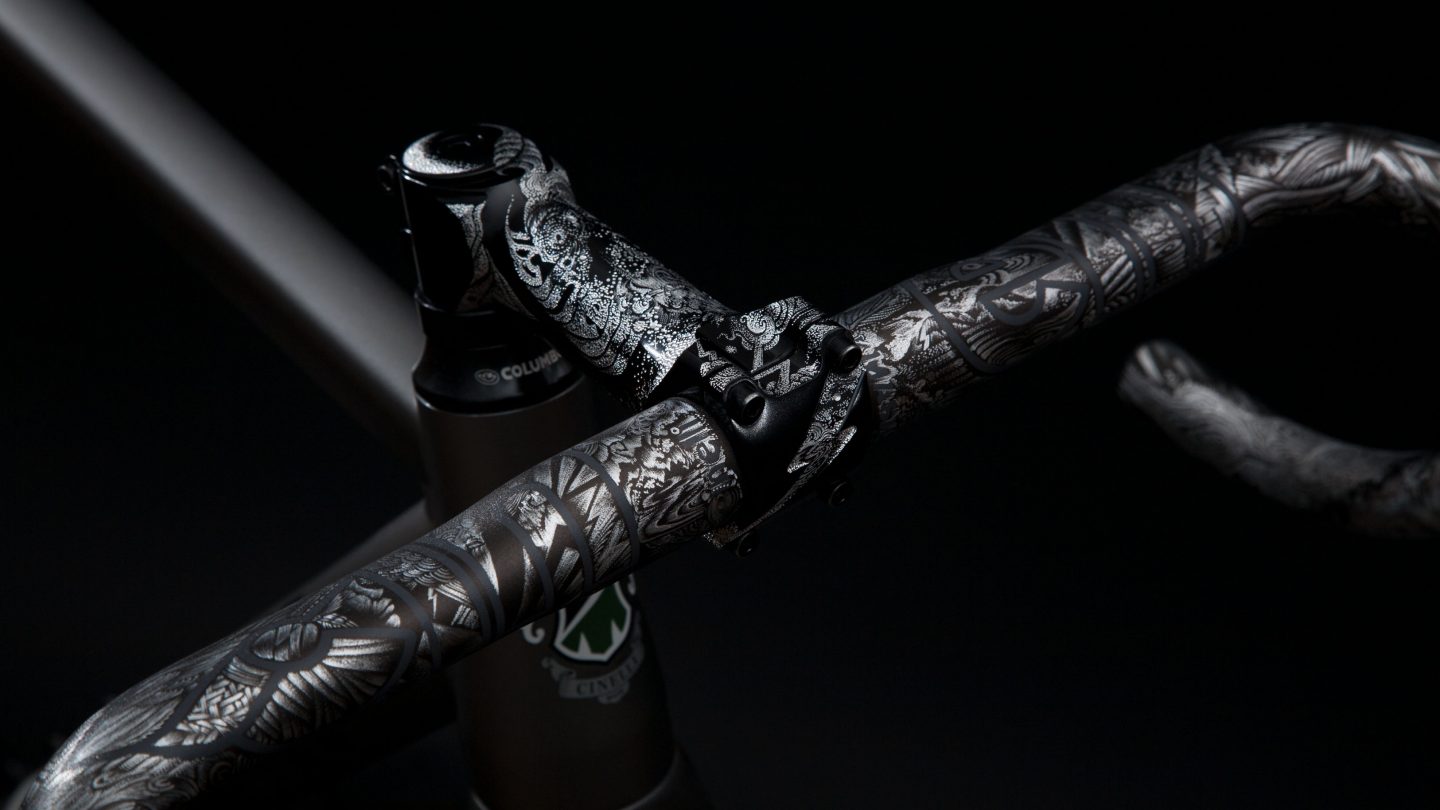 Kosuke Masuda’s unique art draws on Japanese history and the richness of the world around him.

The first time Kosuke Masuda remembers creating something akin to art was when he began studying calligraphy at six years old. Born into an Esoteric Buddhist temple in Mt. Koya, Japan, he was constantly surrounded by Buddhist paintings and imagery – but it was the simple act of putting ink to paper that initially spawned his interest in creative pursuits.

When you look at his engravings, it’s obvious that the intricacies of calligraphy continue to influence Kosuke. The highly detailed dots and lines call to mind Ike no Taiga, a seminal Japanese painter and calligrapher born in 1723. Taiga’s early work offered an inspiring mix of artistic mastery, innovation and freedom of expression that Kosuke’s pieces also evoke.

However, for Kosuke, whether he is engraving bicycle parts or practising sumi-e (a style of ink painting), his work comes down to visualisation and touch. “I think there is imagination before creation. First you must find something that you think is beautiful – like bicycle parts, paper or anything – then observe it and eventually you will see something,” explains Kosuke. “And when you enjoy a lot of observation and imagination, creation also starts by touching.”

It was this type of imagining that turned his eye to bikes in the first place. Remembering that his brother’s 14-inch road bike sat unused in their warehouse, Kosuke suddenly felt the urge to revive it. “I began to polish it. I observed all the places I had never seen before and polished them all by hand … that was the beginning,” says Kosuke.

Certain pinnacle experiences have influenced the course of Kosuke’s life and story. His training as a Buddhist monk is one, the death of his father another. But for his art, the most important experience may have been meeting jazz musician Mark de Clive-Lowe.

The half-Japanese New Zealander took part in an exchange at the temple when Kosuke was 14 years old. They lived together for a year and Mark exposed Kosuke to a “world outside of Japan”. A decade later, Kosuke left for New Zealand to pursue a Bachelor of Fine Arts at the University of Auckland.

Kosuke’s first show with bike components was in 2005 at the Bicycle Film Festival. In the same year he was introduced to the Director of MASH SF, Mike Martin. Since then, Kosuke has collaborated with MASH SF several times – though his hand-engraved work on the Cinelli x MASH SF drop bars and stem is particularly jaw-dropping.

It was Mike who helped to organise Kosuke’s latest show in San Francisco, gaining him sponsorships from bike brand heavyweights like NITTO, MKS,
IZUMI, ABUS and ABOVE BIKE. The show, entitled Between, included engravings on everything from pedals, chainsets, cranks and hubs, plus an entire MASH Steel Frameset in Black Chrome.

“I don’t think that the solo exhibition could have been done without Mike and his family, and also my family. His open-minded and indiscriminate kindness made Between a phenomenon in bike culture,” says Kosuke. “Art is not only in the work of art. I think that it is an experience … between the work and the person who sees it. It seems to be a similar relationship between a bicycle and a person.”

Unsurprisingly, Kosuke’s love of bikes goes far beyond their use as a canvas. He’s an avid cyclist as well, owning four track bikes, two road bikes, one single-gear MTB and a Big Dummy longtail cargo bike – though his favourite one to look at is his Colnago Arabesque 1982. But it’s the feeling of riding that really clinches it for him. The joy of speed, freedom and “new discoveries on old roads”.

But then, isn’t it the same for all of us?

This article originally appeared in issue 24 of Treadlie Magazine.