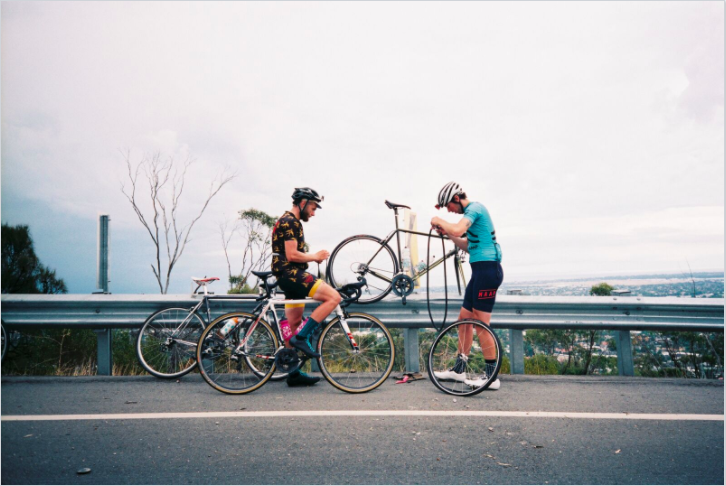 At some stage during the flight from Melbourne to Adelaide I died because when I landed I found cycling heaven. Four days of riding through picturesque rolling hills covered in grapevines, enjoying a thriving café scene and joining cyclists from near and far to take part in group rides are any cyclist’s idea of perfection. All the while rubbing shoulders and hanging out with the world’s best professional cyclists.

Nick Mahoney from Saint Cloud bike shop in Fitzroy had also heard of the greener grass of Adelaide during January and decided to tag along. As we meandered our way along the city’s main thoroughfare, we both felt a sense of certainty that the dream would be a reality.

We spied small bunches of riders taking aim for the surrounding hills, including a relaxed and smiling Cadel Evans waiting for his group to gather at the front of the Hilton. As if the sheer volume of riders didn’t signify that the cycling peloton had moved in for the week, the Event Hub located in the heart of the city certainly did.

Thursday, stage three: this was the day of the notorious Corkscrew Climb, the first real test for the general classification contenders in Australia’s only World Tour race. Nick and I assembled our bikes and inflated our tyres whilst plans were formed devising our afternoon ride, our own journey through the Adelaide Hills to the final climb of the stage.

Meeting point: Monday’s Café- Short Black, sparkling water, ticking the boxes. Within five kilometres of here we were shifting into our climbing gears and relishing the unfamiliarity of new roads. Pedalling our way towards Mount Lofty summit, the dry, rocky eucalypt forest provided a uniquely Australian backdrop, totally alien to our European visitors.

The weaving, rapidly ascending road caused splits among our seemingly relaxed group as we put our friendships in our pockets and concentrated on our own competition – winning the KOM. Arriving at the finish the shade provided by the scrubby bush was now our friend and also a reward as we waited for the group to gather.

Maps have never been a regular travelling companion of mine. Fortunately we had the newly crowned Australian U23 Criterium Champion, Adelaide local, Jessica Mundy as our guide.

Having already climbed 500 metres, Jess reassured our reluctant mountain goats that we were now about to enjoy a rolling ridgeline road, which would connect us to the top of the Corkscrew. Jess clearly knows these roads well, and takes pleasure in showing off her backyard when the tour brings new riding companions to town

Pointing our bikes into the banked corners among the shade of European elms that line the roads, this section more closely represents Southern Germany. As the olive groves and wineries increased we encountered more cyclists at every turn.

Numbers built to such an extent, that bikes were being stored at every possible leaning point. We had reached the Corkscrew. Prime viewing real estate was already occupied so we had to resort to the steep embankments lining the road.

The local CFA had set up a sausage sizzle and some of the crowd had brought beer as well as music, which when combined with the official tour cars’ sirens filled the air with a festival atmosphere.

As the peloton drew closer, the urgency of cars, motorbikes and helicopters grew. The four kilometre ten per cent climb had performed the objective of the race director: splitting the field, and the main contenders showing their cards. The domestiques and sprinters leisurely made their way through the cheering crowd, pulling wheelies and taking on high fives, their job done.

Friday: Stage Four and the Bupa Challenge. For many this is the personal goal of their summer riding. I met Cathie from Melbourne, and this was to be her eighth Challenge. “It’s the highlight of my summer. There’s a group of eight friends from around the country who always meet here for the ride. We’ve all done plenty of these challenge rides, however this is the only one we continue to come back to.

“They change the course every year, so it never gets boring. We also love having the chance of riding what the professionals race, getting a true understanding of the demands of the sport,” she says.

This year almost 6,000 people participated in the Bupa Challenge ride. Rolling up to the ride start at 6am I was blown away by the volume of riders all wearing the Challenge jersey and ready to take on the 142-kilometre journey, some eight hours before the professionals clip in.

As the riders made their way up into the Adelaide Hills and onwards to the rustic windswept Fleurieu Peninsula, the diversity in the bunch was vast. From weekend riders like Cathie, to seasoned amateur racers that still hold childhood dreams of being a professional, this ride is for everyone.

The picturesque coastal town of Victor Harbor was the end location, giving riders the opportunity to contest the last sprint through the finishing banner. Saturday: This would ultimately decide the final result of the 18th edition of the race, which every year is growing in popularity and tradition. Simon Gerrans held onto the slimmest of margins from Ritchie Porte, on the ultimate test that is Willunga Hill, to win the race for the third time.

Similarities between Le Tour de France are everywhere, it being a bike race after all. However the intimacy is far greater; it’s labelled the “people’s race” for good reason. That pro riders join in on the commute from the stage finish back to Adelaide is a truly unique experience for both the fans and professionals alike.

It has all the trademarks of the larger European races, but on a scale that is personable and informal. As Nick and I boarded our flight home from cycling heaven, a banner of local hero Rohan Dennis advertising the race made me think: this town hasn’t only embraced this event, it has made the race its own, reflecting the best aspects of Adelaide as a city.

This article originally appeared in Treadlie 18