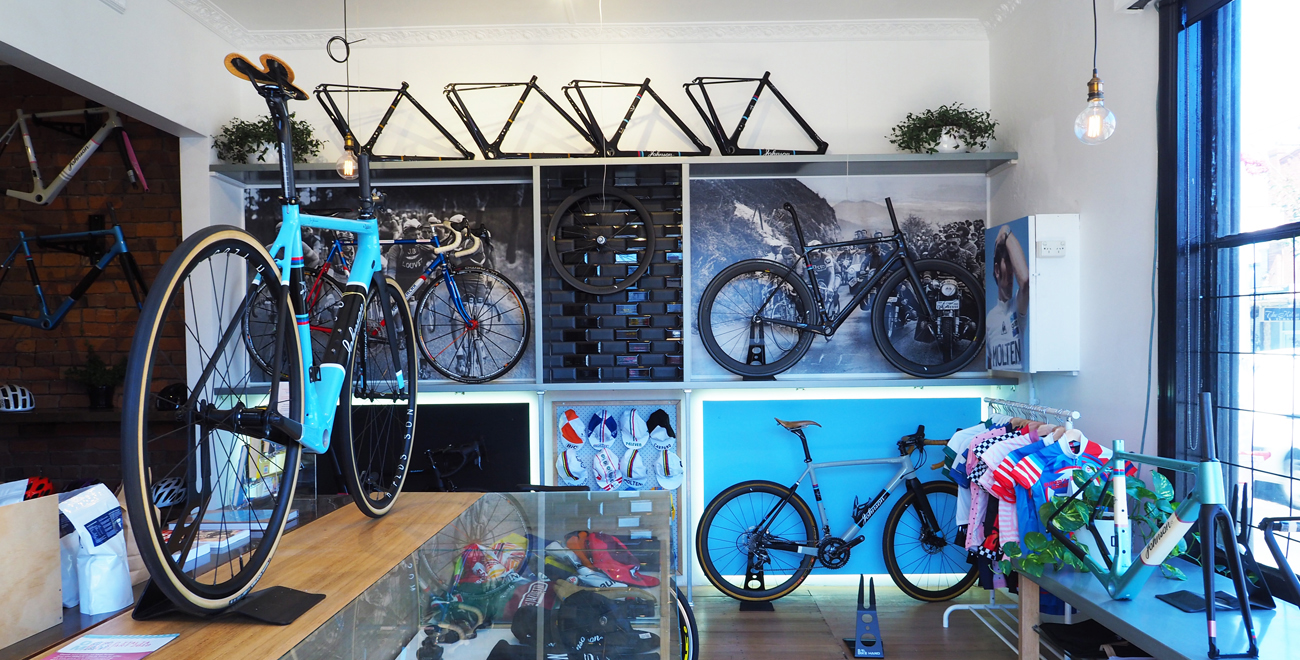 Ben Johnson regales the story of building and designing his flagship store and carving out his niche in Melbourne’s cycling scene. 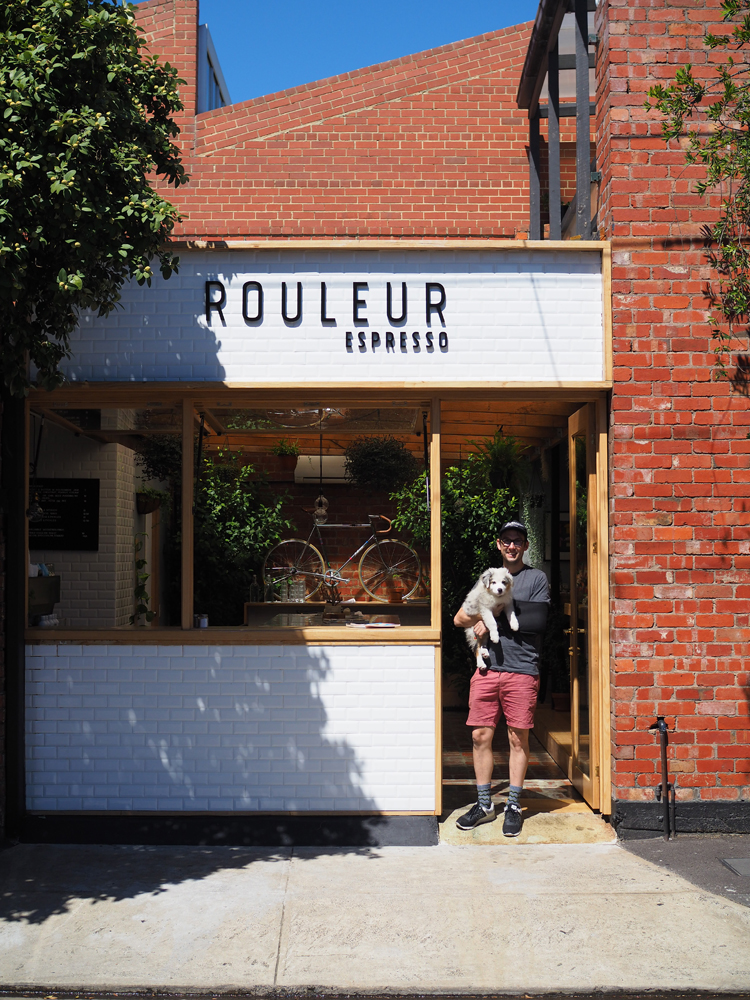 Ben Johnson has spent more time around bicycles than most. For the better part of a decade Ben was amongst the very best of Australia’s pro-cyclists and since entering his post-racing life in 2014, his performance cycling brand Johnson Bicycles has proven popular at home and abroad.

Founded in 2013 and originally based in Noosa, a popular resort town on Australia’s Sunshine Coast, in late-2017 Johnson Bicycles arrived in Melbourne with a flagship store, which Ben describes as the next logical step for the budding business.

“I think moving to Melbourne needed to happen – there’s only so many cyclists in Noosa you can sell bikes to,” laughs Johnson. “We were getting a lot of interest from Melbourne through the online store but it’s one of those purchases you need to see and feel.”

Johnson Bicycles took up residence in a sizeable storefront on Victoria Street, Abbotsford just beyond the fringes of Melbourne’s CBD. A diverse suburb that’s a mix of affluent families, a large immigrant population and youthful renters, Johnson Bicycles slots into an area that’s a jumble of industrial warehouses and discount outlets, alongside trendy cafés and cheap restaurants alike.

The new store features a spacious shop, workshop area and a bright cafe aptly called Rouleur Espresso – named after the all-rounder breed of racing cyclist. With numerous rival businesses within touching distance, taking a jack-of-all-trades approach to the store is a smart approach in an already supremely competitive marketplace.

“Melbourne seems like it’s one of the hubs of cycling – not only in Australia but also globally. In a sense, people know of Melbourne as the sort of the fashion capital of cycling,” says Johnson. “I was just biding my time up in Noosa to get the right space and opportunity to do something special.”

Creating a superior product is something that Ben has long been interested in. Between his time racing in Europe and Australia from the age of 14, he rarely had to worry about having a bike to ride. But when he looked after the Noosa Bike Shop – which his father has run since 1985 – during an extended break from racing, Ben quickly realised that no bicycles matched the geometry or the aesthetic that he was looking for.

Looking to fill that gap, Ben started to research how the world’s leading bike builders produce to such a high standard; touring many of Asia’s foremost manufacturing facilities to help make Johnson Bicycles a reality. While Johnson’s frames maintain a sense of tradition in their concept, the “best materials and the best technology available” have been utilised to deliver a truly first-class ride. Having kept his eye on the Victoria Street storefront for some time, the former lighting shop was in a state of disarray and overflowing with junk from the previous tenants.

Add to that the building’s heritage listing and Ben had a tricky task – particularly because he wanted to design and build the new store on his own. Holding a more than casual interest in architecture and design, Ben previously designed the Noosa Bike Shop and another local clothing boutique. He’d also acquired a handy set of skills from his father, who was a cabinetmaker and home builder before opening the bike shop more than three decades ago.

“Building the place was a pretty intense six months – it was many long days and late nights for a long time. By the time we opened the shop, I was exhausted,” laughs Ben. 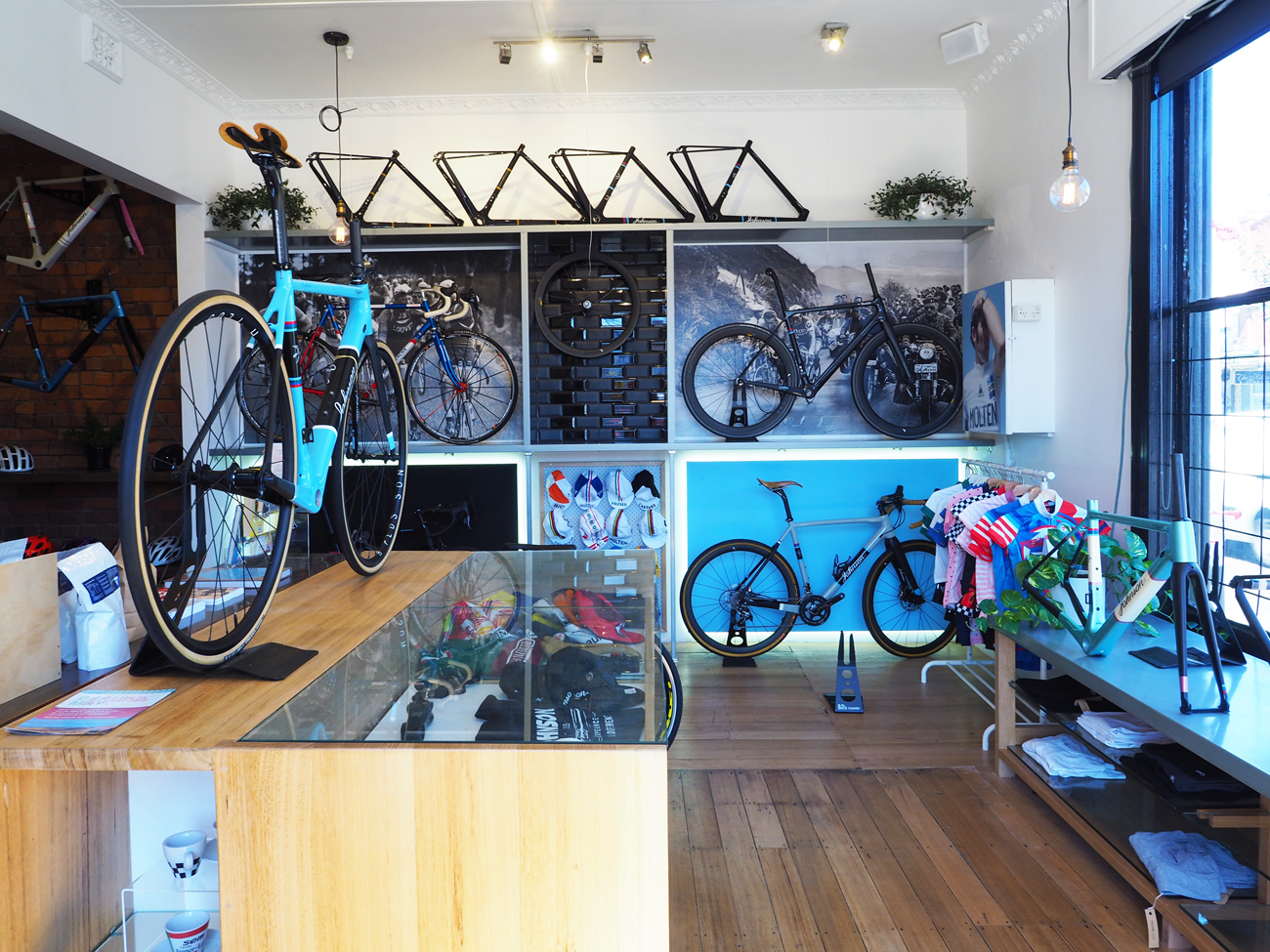 Café and cycling cultures have been intertwined for many years now, and during his time embedded in the scene overseas Ben visited countless bike shops-cum-cafés. But when it came time to open his own space, Ben was inspired to do things a little differently. Walking in to Johnson Bicycles isn’t the same as walking in to Rouleur Espresso. The two are obviously siblings, separated by a large see-through doorway, but they also stand alone – making the latter accessible to all rather than just hardcore cyclists. “Getting the space to flow and work with the open workshop, and to integrate the café, was a bit of a challenge but I think we got it right. You can certainly run each space independently, but you can also bring the whole place together which is quite a unique thing.”

to avoid making the store a bit too “bikekitsch” and working around the not-sostraight walls thanks to the building’s original labourers, there were many obstacles involved with bringing the Johnson Bicycles flagship store to life. “The whole building was a challenge,” says Ben. “But we managed to turn it into a nice unique space. I threw myself a bit into the deep end but I wanted to do something more than just a bike shop. Hopefully this can be just that and serve as a hub for the cycling community here.”