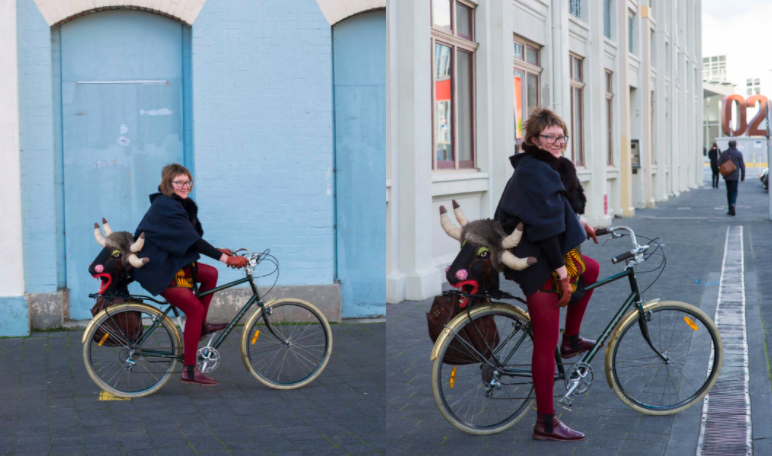 Beauty may be in the eye of the beholder but some people just have style – enter Sabrina Evans.

Sabrina Evans, came to pushbike riding via a broken and idiosyncratic path. “I always had trouble riding when I was young,” says the smiling Sabrina. “And didn’t really manage it ‘till I was about 12 or 13.”

As a young adult Sabrina embraced walking and public transport. Bikes pretty much fell out of the picture for decades. It wasn’t until five years ago that cycling came into focus again in unfortunate circumstances: Sabrina’s brother, once an enthusiastic road cyclist, was in hospital with brain cancer, and declared he would buy his sister a bike once discharged. But this sadly never came to pass.

A couple of months later, Sabrina noticed a handsome, vintage-inspired Electra Amsterdam bike in a shop window and, on an aesthetic and grief-fuelled whim, she bought it. “I knew nothing about bikes and didn’t even try it out,” she said.

It is not hard to see why the Amsterdam’s elegant retro curves and premium leather Brooks’ saddle caught the eye of a craftsperson such as Sabrina, whose style might be described as old world with fine fabric and a twist.

Sabrina soon became obsessed with the bike’s look, and finding the best hardware – fenders, bags and pedals – to do it justice. “I think of the bike as masculine,” says Sabrina of her high top-bar, “male” model. “The hardware particularly so.”

Rich mahogany leather bags were sourced at her local Salamanca market. Italian pleated brass fenders were found online. “Pedals are usually so ugly and I go through them so quickly because I ride so much,” says Sabrina. “But I finally found some great bespoke brass-coloured pedals from Denmark.”

This new kind of accessorising was surprisingly rewarding. “Riding has extended my sense of style beyond just what I wear on my body,” says Sabrina. Her long, bright, stockinged legs transport her to client meetings, recently she has been working with TV actress, Elizabeth Debicki, as well as with Hobart’s Museum of Old and New Art (Mona), and their offshoot mid-winter festival, Dark MoFo.

“For the past four years, I have done all my business deliveries, pickups and fittings by pushbike.” This has also included kitting out Mona founder, David Walsh’s wedding party with bride Kirsha Kaechele.

The seamstress’ mid-life cycling Renaissance has brought other unexpected benefits. It was pure luck the Electra suited Sabrina’s preferred way of riding. “I found out that I like to sit up and look around.”

The upright position also happens to be a wonderful antidote for dodgy necks, a common problem for seamstresses. “[Push biking] stretches me out,” says Sabrina. “Keeps me off codeine for my neck pain and migraines.”

As well as being visually pleasing, her bright stockings and sparkling fenders enhance her road visibility. They are also part of the reason she stands out among fellow cyclists, although not all. “I have an emerging art practice with lots of soft sculptural bits,” Sabrina says. “They don’t fit in my bags so I usually strap them to me when I ride.”

Consequently, it can appear as though her back has floppy limbs and body parts sprouting from it. These have been known to fall forward and wrap around an actual moving limb.

“The bike has been a great way to promote my business,” said the accidentally conspicuous cyclist. As a result she finds word of mouth and a distinct riding style to be sufficient publicity.

While incentives to ride have continued to surprise and multiply, Sabrina still delights in the aesthetic that was initially attractive about the Amsterdam; it finally feels complete.

“And as the fenders and leather age a bit, they will become even more handsome. I am back in love with it again – all those little details, the quality.”