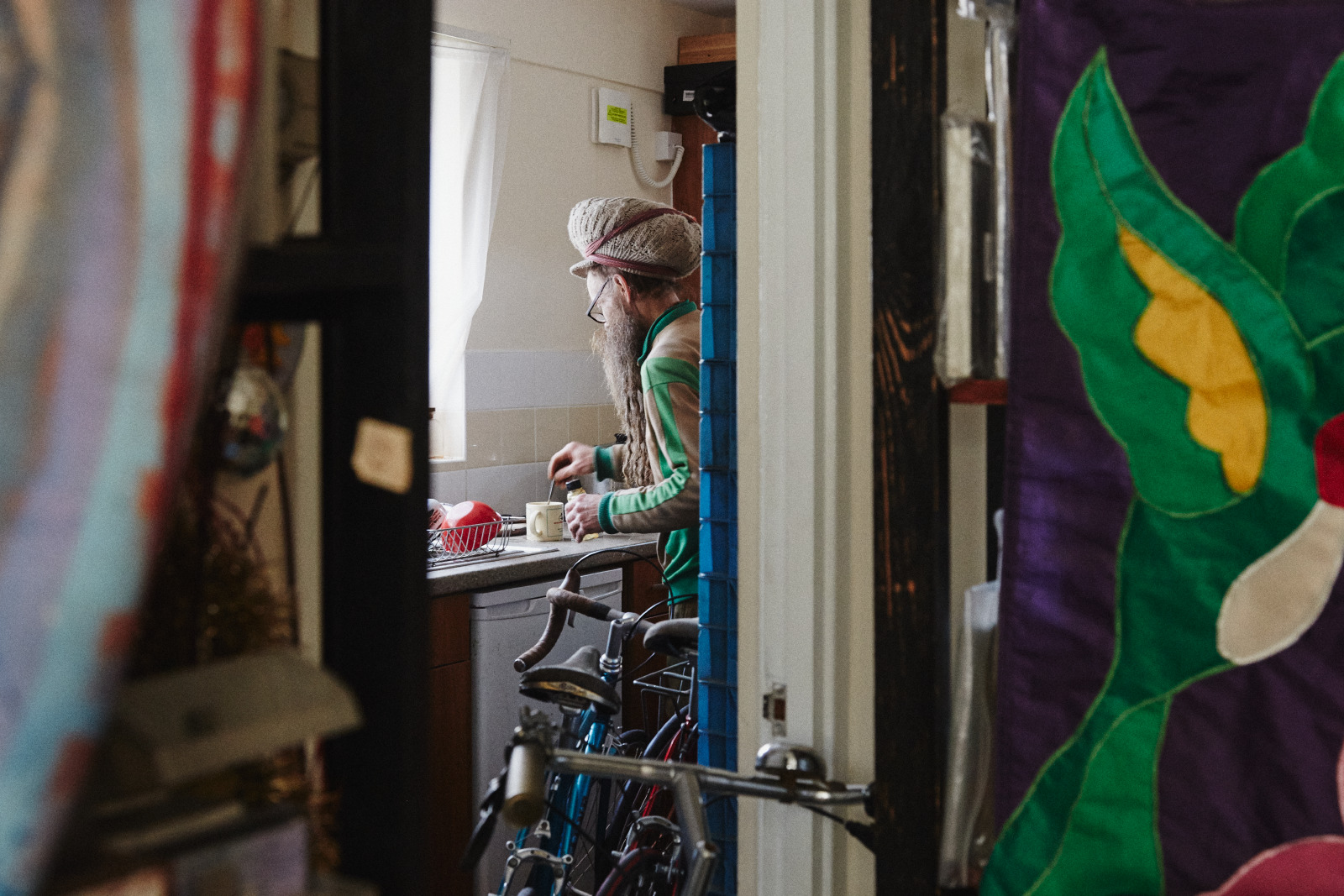 John Hayes has been a bike collector since the early 2000s, but it was long before that that his cycling obsession began to take over his life. In 1983, while attending London’s Imperial College, Hayes joined the university cycling club becoming a keen 10– and 25–mile (between 16 and 40 kilometres) racer, with this early interest heralding his now all-consuming fascination.

Nowadays, John’s compact Bethnal Green home in London’s inner northeast has become overrun with a gamut of bicycles that would make even the most avid of collectors envious.

John’s assortment of new and old bikes are packed indoors and out with scores grouped together across the frontage and surrounding his home. With a preference for the lightweight steel racing bikes of old, John estimates his collection to be reaching almost 100. “Alas storage is now an issue,” John laughs. “Needless to say, I hope someday to get my bathroom back.”

A bike mechanic by trade, throughout the years, John has worked for several local cycling shops. His passion for bicycles is drawn from their elegant materiality and utilitarian purpose, saying: “In the bike world it’s horses for courses. For example, when I’m towing a heavy trailer I use a Mongoose rigid mountain bike.

When building and fixing new rides, John takes parts from his enormous collection, while using his many years of experience to create a great riding experience. Lastly, to give his final stamp of approval, John never misses his chance to take a completed ride out for a spin.

“After I build a bike, first I get to enjoy a test ride. Every bike ride is different – I always consider that perhaps I can improve the ride or components. With my work, I describe my builds as sympathetic with age-related parts and with a bias for performance … working on a clean bike is a slight bonus – rebuilding a bike is particularly satisfying,” describes John.

A frequent bicycle seller and trader, John unearths new additions to his collection through London’s rich fabric of cycling hobbyists and those who share his slightly more fanatical nature. “Bikes come to me from many varied sources – my fellow bike mechanics, bike collectors, as well as from bike jumbles and car boot fairs,” says John.

However often John’s best discoveries have been made by hitting the streets, searching for what he calls “the abandoned treasure,” or the broken-down and parted bikes found discarded throughout London’s vast metropolis.

One of John’s favourites amongst his collection is a Moulton 1964 Mark II, which he rolls out for a once-yearly ride around Richmond Park with other Moulton owners. Another highlight is the Maclean 531 from 1936–39, a rare British make that were produced in nearby Islington until the early 1960s.

Despite its age, the Maclean’s ‘featherweight’ hybrid design fits right in alongside the sleek modern bicycles we often see today. As John explains of the 531: “though it’s made for 26-inch wheels, the 700c style bicycles just fit with our tight modern geometry. The 531 refers to the Reynolds tubing from which the frames were made – anyone experienced at riding fixed-gear bicycles could easily ride competitively on this 80-year-old bike.”

During the English summer, John often joins local Critical Mass rides through the streets of London. These monthly political-protest rides are an informal way for cyclists to reclaim the streets together, while actively campaigning for the promotion of better cycling infrastructure, road conditions, changes to traffic laws, and a multitude of views.

“Today there are more cyclists in London than car drivers,” says John. “Take the cars out of town, and the pollution, and we step closer to an urban paradise.”