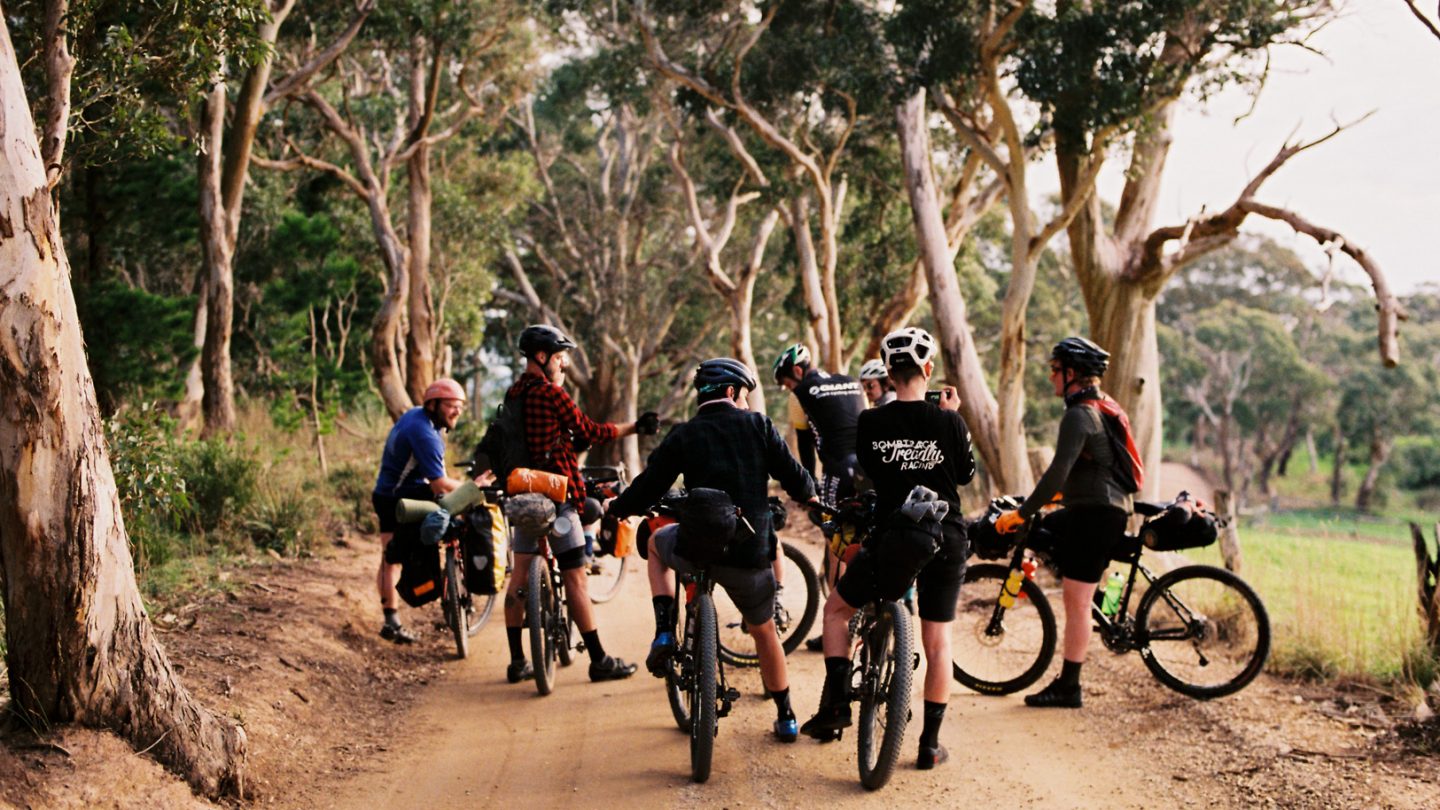 Ringing in the solstice with excellent company on the annual Swift Campout.

This year is the fourth time Swift Industries has announced a world-wide camping event to celebrate the solstice; marking the darkest day of winter in Australia and the brightest day of summer in the Northern Hemisphere. Every year it has rolled around I’ve been wildly unprepared. This year was going to be different. My custom packs had been ordered from Terra Rosa, sleeping arrangements had been made, the route was on my GPS device. I’d even purchased the official Swift Campout neck scarf. This was an adventure I was attending. Terrible rains were forecast about a week out, yet two days before, sunshine pops up in the weather app. It was set to be perfect for the weekend! Bags were then filled to the brim, and strapped to bicycles.

On the morning of departure, other people on bikes began rolling up at Treadly Bike Shop as we were seated across the street, hands wrapped around coffee mugs. The variation in bicycle types and setups was broad, with choice of packing gear even more so; everything from 90s mountain bikes to road bikes with tiny tyres, all loaded to capacity.

Off we set, a ridiculous jumble of bicycles, gaining stares from every angle as we rolled through the city and up into the hills. Vibes were high, sunshine was warm, chatter was at a perfect level. Our winding route took us on picturesque roads and back pathways, all the way into Mylor; a small town with the most gorgeous café on the main street. Our bikes leant on their sides amongst the autumn leaves, and beneath oaks containing hanging light bulbs we all sat as assortments of cake, sandwiches and what must be the world’s most incredible hot chocolates were consumed. After quite a period of eating, resting and laughing, we managed to get ourselves
back onto our bikes and continue.

Kuitpo Forest was our destination, and it wasn’t overly long before we entered the area. Gorgeous pine rows and eucalypt forests grew to our left and right, fresh mushrooms squishing beneath our tyres on the damp gravel fire-roads. We had arranged a hut instead of camping, due to the previous weather forecasts. Upon arrival, we discovered our ‘hut’ was something closer to an Airbnb, equipped with a stove, heater, couches and comfortable bunk beds. After eating our dinners around a newly-created fire, we took ourselves to bed, to all sleep very soundly.

Those of us with mountain bikes had made plans to ride the nearby Prospect Hill trails, and our leave time was just a little past sunrise, so we abandoned our packs and set off toward the forest destination about three kilometres away. The air was thick with an almost comb-able fog and the pine needles covering the trail floor were thoroughly damp, but this proved to be the best idea. Winding and ducking our way between creaking tree-giants through the heavy mist was an other-worldly experience.

I had arranged to ride back to the city alone, leaving the other campers to find themselves coffee at the local café, located fifteen kilometres from the hut in my wrong direction. The fog had definitely not even considered departing, so it became my ride buddy. Having created a GPS route for myself that I had never actually ridden, I hoped for the best, and set off along the purple line on my device’s screen.

Immediately I had myself lost, following an imaginary path which led me straight through a dense forest; over logs and through ditches. Soon enough I realised I’d been trying to follow a walking path, which was marked as being not far to my west. After sorting out these glitches, the rest was easy enough. The fog came and went, meeting me in every valley and leaving me at every crest. Being alone in vast, misty forests was somewhat terrifying, with thoughts of burly male hikers or wandering Wolf Creek-style farmers in utes crossing my mind, but it was also exhilarating and incredibly beautiful beyond words. I rode with kangaroos, crossed the path of a family of deer (antlers included), became caught up in a flock of galahs and white cockatoos as they dipped and screeched around me. Tiny wrens of several species chirped and flitted as I’d pass their nesting sites. I rode through old mines, along the gravel of train lines, through nature reserves, and made my way back into civilisation.

It was a breathtaking experience in every sense of the word, and one I hope to share with more women when the next Swift Campout rolls around. If you’re planning a trip to Adelaide at some point, make it this particular weekend in winter and I would be more than happy to ride this route with you.