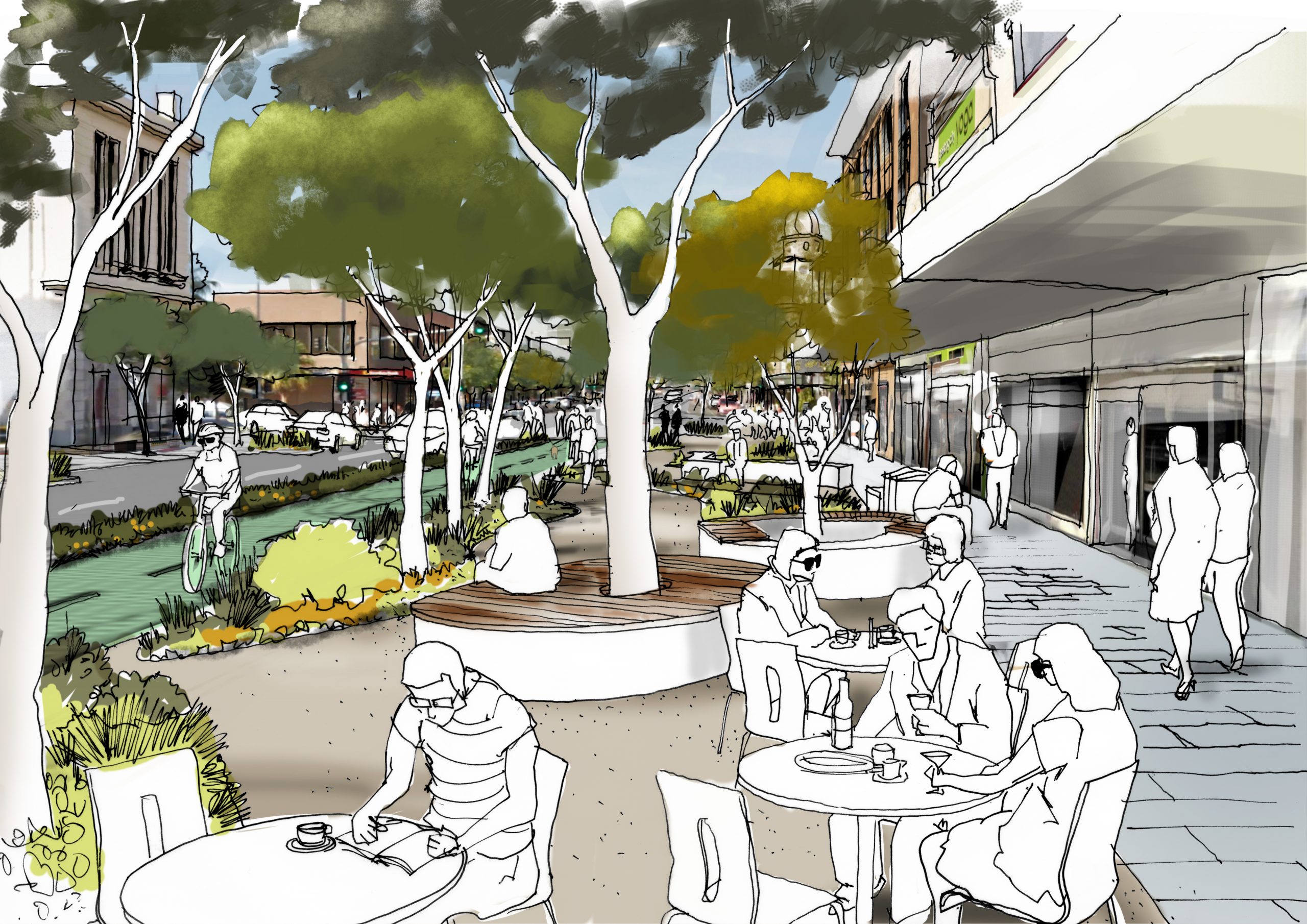 The City of Geelong has released plans for Malop St which includes a fully separated bike path encased in foliage. The Green Spine project will transform Malop Street into a vibrant street and linear park, connecting from Johnstone Park to Eastern Park.

The project will deliver more trees and green spaces to the heart of the city, transforming it into an attractive and inviting place: a City in a Park. A plan for the first stages of the Green Spine in the commercial heart of the city has been prepared, for the area between Gheringhap and Yarra Street.

The plan is based on a vision for the street as a ‘Botanic Walk’, with a continuous canopy of trees and a series of different alfresco, seating and gathering spaces along the length of Malop Street, linked by a network of paths.

The plan includes a generous parkland on the south side of the street, creating more places for people to relax, meet friends, shop, eat, walk and play. The north side retains its wide footpaths, with more trees and plantings to complement the south side.

In addition to greening the street and making it more people friendly, the plan also makes the street safer, more accessible and user friendly for bikes. A two-way separated bike lane is proposed, beside the parkland on the south side of the street.

The Malop Street Green Spine has a clear point of difference from other regular tree-lined streets within Central Geelong, reflected in the plans. Located in the heart of the commercial area, Malop Street has an important social and economic role as the focus of activity, in addition to linking key parklands.

The importance of the project is recognised by both State and Local Government. The concept of the Green Spine was initially identified in Vision 2, as a key catalyst for the revitalisation of the city. The project is one of the top priorities for Council as part of the implementation of the Central Geelong Action Plan.

The plan for the initial stages of the Green Spine has been prepared as part of the Malop to Myers Street Revitalisation Project. Through Regional Development Victoria, the State Government has committed $3 million to the project in addition to $4.5 million from Council.

The first section to be constructed is Clare Street to Moorabool Street. Council is currently seeking funding to deliver the balance of the street between Gheringhap and Yarra Street.