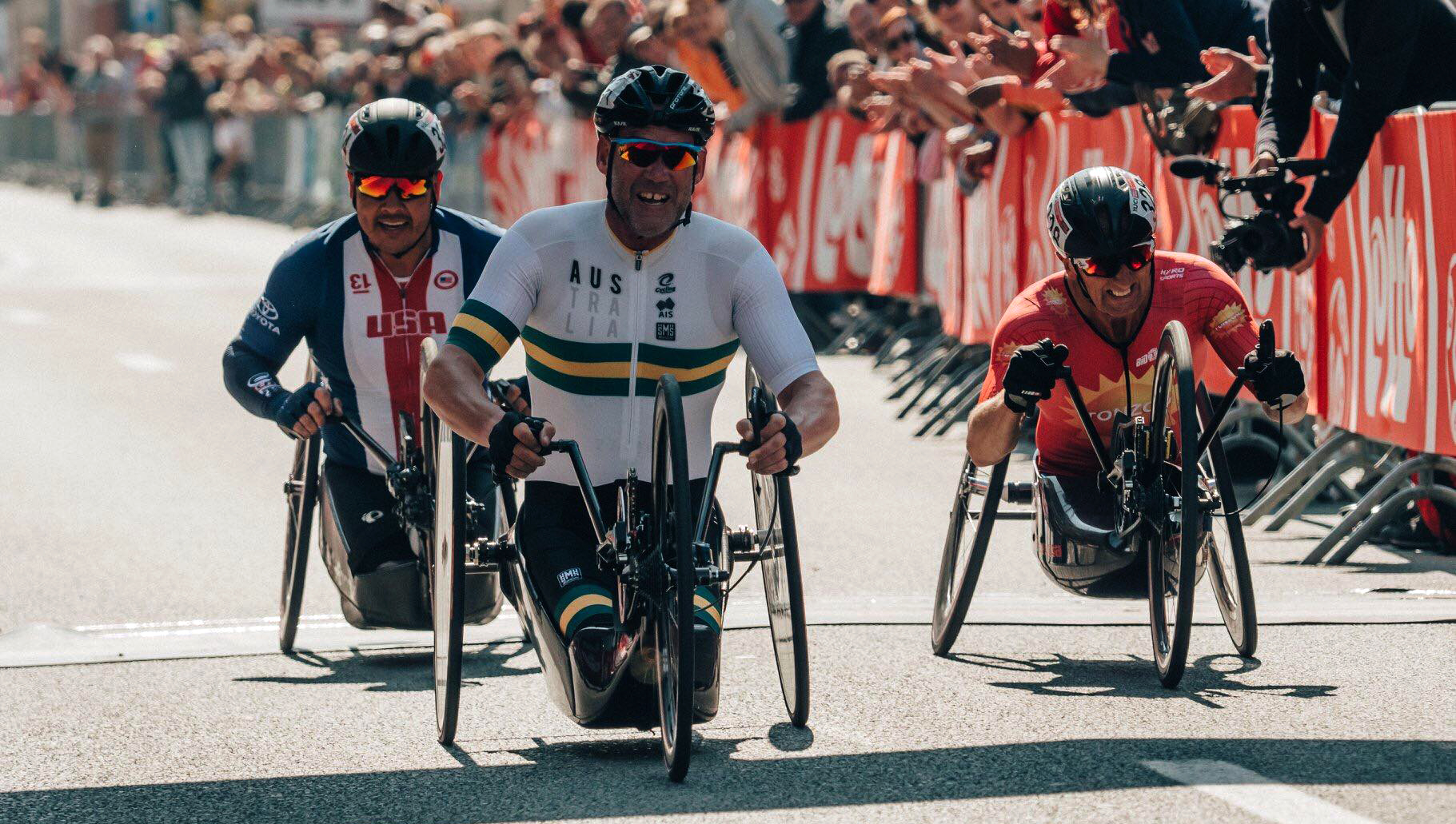 There is a sinuous motion to Stuart Tripp’s pedalling style. It’s almost hypnotic. His torso sweeps back and forth smoothly as his arms move in perfect harmony to turn the pedals of his hand-cycle.

Tripp’s journey to becoming an Australian Paralympian began in 1994 when he was in a horrific car accident in rural Victoria. The accident left Tripp comatose from significant head trauma, with kidney failure and serious crush injuries to both of his legs, including a compound fracture that tore through his right calf leading to an amputation below the knee and serious nerve damage to his left.

After a four-and-a-half month stay at the Royal Melbourne Hospital, Tripp moved to the Royal Talbot Rehabilitation Hospital to learn how to live with a prosthetic leg.

“I’d never injured myself like that before and with no frame of reference to fall back on, I said you just get back on with life again, like you just jump back into life,” Tripp said.

Fast-forward five years and he was a mess. The accident had irrecoverably changed his life. He struggled to find direction and felt that he was failing at everything. He was drinking too much, smoking two packs of cigarettes a day. One of his friends that he met during rehab died and another was dying.

Tripp’s family and friends were extremely concerned and tried to intervene with little success. Finally, Tripp’s mum took action and made an appointment with a psychologist for him. He went and by the end of the session he was in tears, asking if the therapist could help him. Thankfully, the therapist said he could.

It was at the suggestion of his therapist that Tripp thought about taking up some form of exercise. With some prompting from a friend, he tried swimming. Within a few months, he could swim 30 laps in an hour. But the repetitive up-and-down of lap swimming bored him, so he started to think about what else he could do. He found a test hand-cycle in 2003 and tried it out.

“I got my hands on the grips and I remember turning the crank over for the first time and I just went: ‘Oh, how much anger and frustration and aggression am I going to get out on this?’”

Tripp joined the St Kilda Cycling Club and after learning how to race, he competed at state championships and then nationals. He made his first Australian team in 2010. He is now a Victorian Sports Institute scholarship holder with a full coaching team behind him. He has competed at multiple international competitions. Tripp’s racing highlight is winning silver in the H5 men’s time trial at the Rio Paralympics in 2016.

His achievement is even more remarkable because it was a race he almost didn’t make.

In early 2015 Tripp was on a recovery ride after doing a time trial, when he lost control of his bike while coming down a hill. He broke his arm and injured his right knee when he was thrown out of his bike. He went from being an elite-level athlete to getting about in a power wheelchair because he couldn’t use his prosthetic leg or a manual wheelchair.

Tripp laughed when he recounted his horror at being stuck in powered wheelchair. “So I’m in a power wheelchair that was set to six kilometres an hour maximum speed, which I had to get boosted because that was not going to work.”

He struggled to be ready for the South African around of the 2015 Para-cycling World Cup but needed to go to be in contention for the Paralympics in Rio. After the championships, it was still unclear if Tripp would make the Australian team. All he could do was wait and train.

He finally got the call to say he was going to Rio. Because of his accident, Tripp wasn’t expected to do much. The start list was released and it didn’t take long for him to find his name. He was number one out of ten starters; meaning that he would have no one to chase and no one to benchmark his ride by. Tripp led for the entire race until the last rider, Alessandro Zanardi, crossed the line. Zanardi won by a mere 2.74 seconds – but for Tripp it still felt like a victory.

“I was winning the race all the way up to the last 2.74 seconds. I was the first loser, but it was good. I lost to a champion but it was an amazing race.”

His attention is now focused on the 2020 Paralympics in Tokyo, where he hopes to go one better and win gold.

He is a man on mission.