The 3000 Rides title is a nod to the postcode of the CBD, the city’s most hectic and eclectic neighbourhood, and also hints at the diversity of Melbourne cyclists, from lycra-clad racing cowboys to parents sedately ferrying around toddlers in Christiania bikes.

3000 Rides is the first instalment of sartorial cyclist portraits for Melbourne’s new big screen. “Melbourne is arguably Australia’s most design-conscious city, so we wanted to profile riders [who] combined a passion for cycling with a particular design aesthetic,” says series co-director Rachael Antony.

General Strike began research with no particular kind of cyclist in mind, and within a week or two they had recruited three cyclists with very distinct aesthetics.

Howard, an extremely articulate bike mechanic (somebody give this guy a podcast!) is originally from Darwin and is currently working at Tokyo Bike. He was profiled with his Factory Spec Focus Paralane in the Docklands district. (Howard is a minimalist to a fault and half-froze to death during the icy ‘Sandi Noir’ style shoot conditions).

Melodee is a DJ, designer and occasional participant in Women’s Alley Cat races organised by Pony Bikes who is originally from Brisbane. She was filmed with her self-built fixie at ACCA, where the hunky architectural/industrial vibe just seemed to meld perfectly with her.

At five storeys high and comprised of 850 LED panels, Federation Square’s new digital facade it is one of the largest screens in Australia and certainly the most unusual.

Part of the film appears in the northern screen that overlooks the transport hub around Flinders Street station.

General Strike Co-Director, Laurence Billiet says, “We’d like to think the films prompt drivers and pedestrians to notice cyclists on the road more and perhaps inspire other people to get on their own bikes. Since making the series both Rachael and I have dusted off our Bromptons and taken to the streets, so, I guess that’s a 100 per cent success rate so far.”

The films are currently screening at the following schedules, and will be on regular rotation throughout the year. 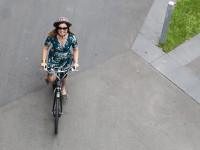 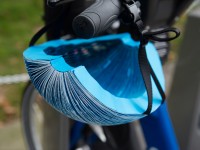 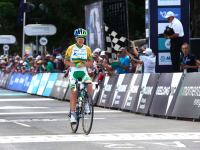